On Twilight Beasts you will hopefully have seen some of the amazing mummified animals of the Pleistocene. Some of these mummies may even be like old familiar friends to you: the woolly mammoths Lyuba, Buttercup, Khroma, Dima, Yuka, and Mascha, Sasha the woolly rhino, blue babe the steppe bison. Let’s not forget the recent discovery of my personal favourites Uyan and Dina the gorgeous cave lion cubs. Given the paucity of remains of extinct ice age mammals that have come to us from through the ages, the permafrost mummies that retain exquisite detail of hair, tissue, and skin allow us all to look into the face of a vanished time. You would think that any species we had almost complete mummified bodies from would be ice age superstars, with the level of pop-culture saturation that mammoths have attained. You’d think, but that’s certainly not the case. For instance, I’m willing to bet that few of you have heard of the stagmooses (stagmeeses? stagmice?), Cervalces scotti and Cervalces latifrons! Well, these guys are super-weird, and are represented in the fossil record by not one, not two, but three remarkably complete permafrost mummies. 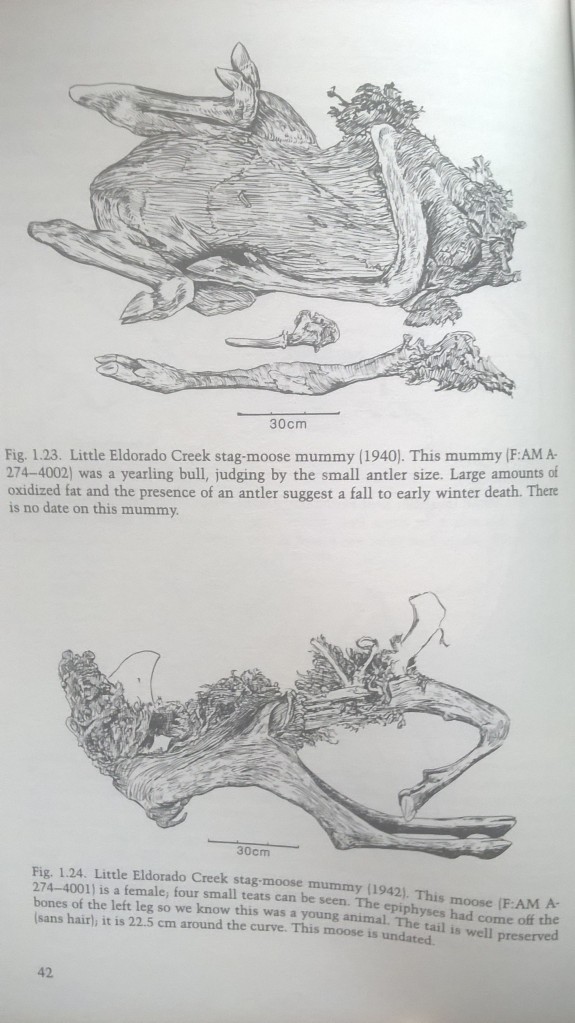 Two Cervalces mummies from Alaska. Image taken from R.D.Guthrie’s classic “Frozen Fauna of the Mammoth Steppe”. I would dearly love to see a photo of these specimens but I have been unable to source any.

Some background: imagine if South Park style, a moose made sweet, sweet love to an Irish Elk and had some adorable babies. That’s essentially what a stag-moose looks like. 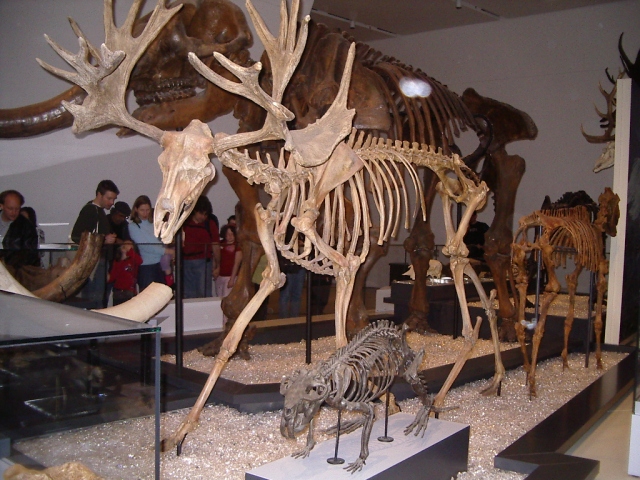 Another view of Cervalces scotti, at the Royal Ontario Museum. Image by Staka via Wikimedia Commons

C. scotti is the species known from North America, and C. latifrons the species known from Eurasia, but whether the two are actually close relatives or not nobody really knows (some refer to C. latifrons as Alces latifrons, moving it to the genus of the true moose, Alces alces). C. scotti may even be derived from Middle Pleistocene immigrants of C. latifrons. Whatever the relationship C. scotti definitely seems to be a genuinely distinct genus and species. Like Megaloceros, this species has a deer-like face and impressive rack, but in common with the moose, it has long legs and more palm than tines on its antlers. The antlers are themselves phenomenally complex features. Perhaps some of the most complicated headgear ever to evolve in cervidae and also fantastically variable throughout the species range. 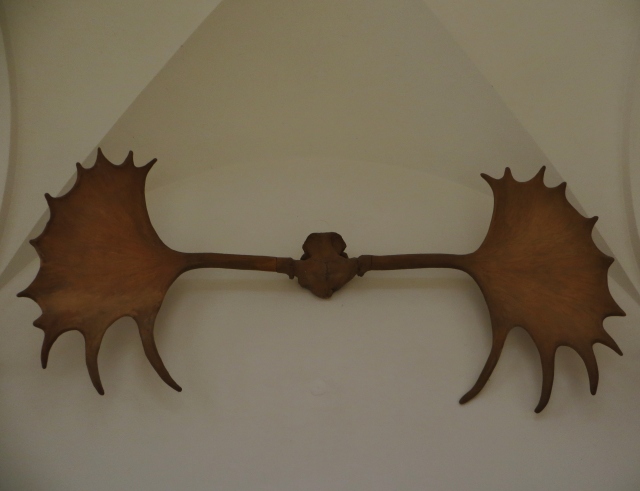 Alces latifrons antlers, from the Natural History Museum of Mainz, image by Ghedoghedo via Wikimedia Commons

Cervalces scotti is something of an enigma. Despite the mummies (which all frustratingly lack the preserved head that would give us vital information on the character of this species) and some nearly-complete skeletons, pretty much everything else is up for discussion. Confined to northeastern America and Yukon/Alaska it appears to have had fairly specific habitat requirements, although what these were is ambiguous. Perhaps some kind of nonanalog environment was the preferred home for the stag-moose, something boggy and open, with not much woodland, which would explain why so many of their fossils are found in excavated peat layers. Whatever its requirements, radiocarbon dating shows that Cervalces scotti disappeared around 10,800 years ago. There is currently no evidence for human predation of Cervalces in the Americas, but bones of this taxon were found in the same layer as bone points at the archaeological site of Sheriden Cave in Ohio. It also is likely to have been affected by competition with the true moose (Alces alces) which came over the Bering land bridge about the same time.

It seems the stag-moose is an open book waiting for some dedicated researcher to step in and show an interest. The species complex is ripe for ancient DNA analyses that could resolve questions of paraphyly or stable isotope analyses to narrow down the vegetational needs of this unique lost species.

2 Responses to No Bullwinkle