My daughter froze. She had just been hopping across the coarse, sun-baked sand bank to paddle and splash in the cold, clear River Teign. Giggling, she skipped back across the gravely sand, where she would turn and repeat the process, as she had already done a dozen times to her delight. Only this time she came to an abrupt halt. She had spotted something. Her older brother had taught her well: a little movement or a flash of colour may be some hidden insect just waiting not to be discovered. She crouched down and lay on her tummy. She was transfixed. I lay down beside her and that’s when I saw it: a small, rather dull bee digging in the sand.

She had watched big, hairy bumble bees disappear inside beautifully coloured petals to emerge covered in yellow dusty pollen; a small price to pay for that rich nectar. She had seen bee keepers, looking like some extra in a 60s sci-fi alien film, pulling honey from human made bee hives. She had even seen a chimpanzee easily destroy a bee hive with a big stick on a natural history programme. For a three year old, she knows quite a bit about bees. But she had never seen a digging bee. 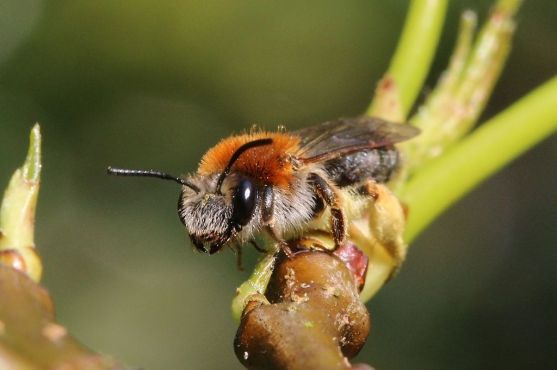 This ‘digging bee’ was actually a bee belonging to the largest group of solitary bees: the mining bees. They dig out a little burrow in sandy soil, where they lay around five eggs in individual pods in the sides of the burrow. Mining bees are cool because they actually dig tunnels. They also help pollinate plants along with beetles, flies and plenty of other mini-beasts. Another cool thing is that some species are hosts for other animals. In Britain the beautiful, big, shiny Oil Beetles rely on the mining bee to survive: the youngsters jump onto the back of their favourite type of mining bee and catches a ride back to it’s nest. Once there it devours the eggs, and uses the mining bee’s burrow as a home for safety against predators until it emerges as an adult. What a fascinating dependence for a species to survive: without one specific species of mining bee, this oil beetle wouldn’t be here.

The hidden world of life under our feet is often out of sight, and so out of mind. Bees digging burrows? Ferocious beetle larvae using these burrows as a surrogate home? This unseen world is pretty incredible. It turns out that this world is around us more than we realise. And it has been hidden for a very long time.

I had always had a little fascination for this hidden world where many animals actually spend the majority of their lives, to sleep, mate, and bring up their little ones. I recently saw on Twitter that a fellow science tweeter, Anthony Martin, had a new book just released: The Evolution Underground. Because Twitter is all about networking, collaborating, and sometimes being politely cheeky, I asked if I could review a copy. And because the science community on Twitter is wonderful, I was sent a copy. Although this book is not solely about Pleistocene burrows, I wanted to review it because the story of burrows is so often forgotten about in daily life.

I wanted to find out more about burrows and how there could be an entire book about them.

And this book is all about the burrows. All. About. The. Burrows. 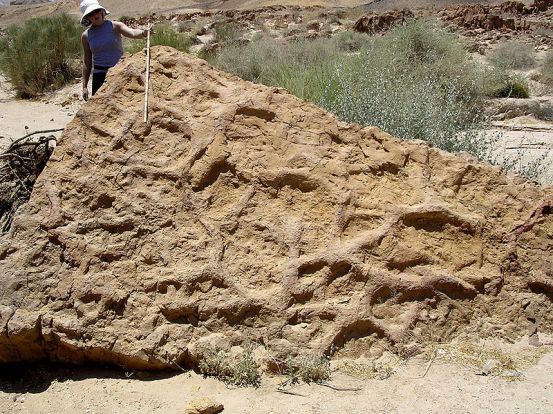 A pretty impressive slab of rock holding huge burrows made by crustaceans, from the Middle Jurassic. (Image by Mark Wilson. Public Domain)

You may think that this might be pretty dry reading, but you will be very surprised. If you hadn’t thought burrows painstakingly dug out by animals were interesting, you haven’t seen a burrow painstakingly dug out by an animal. Martin, now at Emory University, Atlanta, has spent his professional career studying fossil tracks and burrows, so he knows an awful lot about them (this field of palaeontology is called ichnology). This shines through as Martin deftly describes dimensions of shapes, twists and turns of more burrows than I ever imagined existed. These remains of evidence of animals, such as footprints or burrows (known as trace fossils), can tell us an awful lot about life: even life that vanished hundreds of million years ago.

I could happily give a summary of each chapter because they are individually fascinating, all with their own unique little stories. But I will keep some of the suspense and discoveries for you. However, I will tell you about my two favorite chapters looking at burrows: one delving into deep time, and another I am much more familiar with.

Before 540 million years ago, when the land was naked and the seas were bustling with strange and wonderful forms, life was very different. The fossils from just before this time were just plain odd. Collectively known as the Ediacaran Biota, these are some of the most bizarre fossils you will ever see, they don’t really look like an animal or plant: they don’t look like anything really. Bizarre, but also spectacular. These faint imprints are the earliest evidence of multicelluar life on our planet, from between 635 and 544 million years ago. I was delighted to find a chapter dedicated to the Ediacaran time and just after, and more so when I read about the work of a colleague I recently met from across the pond. 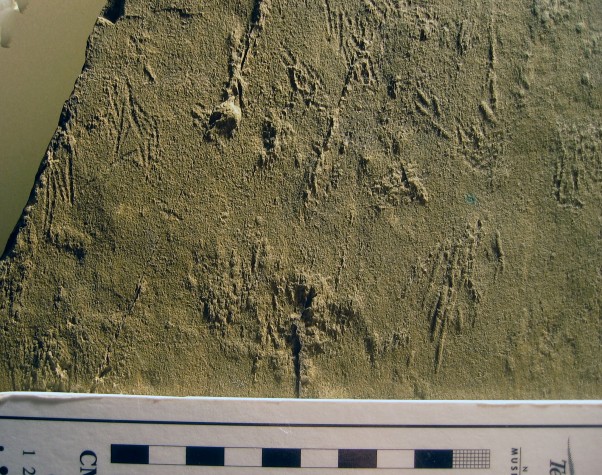 One of the most beautiful slabs of rock I have ever held. Ediacaran fossils at the North Carolina Museum of Natural Sciences. On it you can see imprints towards the top left, and more elongated shapes towards the bottom right. Are these burrows or fossils?  (Photograph reproduced with permission from Antony Martin)

I met Trish Weaver some months ago whilst visiting several museums on a mini-museum tour across America. Trish kindly showed me the incredible palaeontology collections at the North Carolina Museum of Natural Sciences. Although having never met before in person, that shared connection through our museum work gave us an instant familiarity and we got on effortlessly. Trish kindly showed me the Pleistocene mammal collections, listening patiently as I chatted excitedly looking at enormous Ground Sloth bones. I asked about her favourite collections in the museum, and she quickly replied “our Ediacaran fossils”. I slowly put the Ground Sloth vertebra carefully down, and asked in case I misheard, “You have Ediacaran fossils in North Carolina?” Trish’s eyes sparkled. She walked me across the enormous store room, opened a cabinet, and without even pausing, pulled open the wooden drawer. There it was. It was beautiful.

For those readers who might read this as some unspoken love story, you would be right. This was a ménage à trois between a slab of 545 million year old rock and two people who had utter, complete, unconditional respect for it it. As Trish handed me the large piece of rock, I will admit, I didn’t see it straight away. That small dark smudge was it. And then I spotted more. These were fossils. Not of anything familiar, but of some colonial algae that lived long before the first trilobites: these were fossils from the very dawn of life. And both these fossils and Trish feature in this book.

The fossils I ware looking at were long thought to be burrows of some unknown little critter. Trish, along with Martin and a few more researchers, looked at these fossils with fresh eyes and discovered that these burrows were actually the remains of some strange colonial algae. Once growing on the 545 million year old sea floor, they were broken off and spread along the sediment by currents. That these burrows were not really burrows was an important finding because burrows in the Precambrian were rare: now they were even rarer. Why were burrows so rare 545 million years ago? I won’t spoil it for you, but instead we will jump forward in time, to a place you will be more familiar with: the Pleistocene.

It was great to see a lot of space given to the incredible burrows of the giant sloths and giant armadillos in South America. These creatures dug burrows. And they were huge. 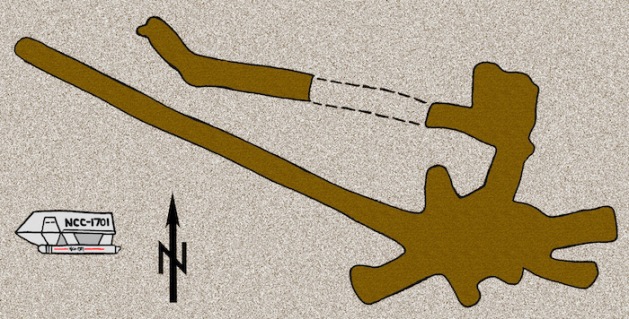 We wrote about the enormous burrows of giant ground sloths, but Martin uses his knowledge to dig a little more than I could have. There are hundreds of massive tunnels in South America. Some have been filled in with sediment, while others lay undamaged. For some time they were thought to have been dug out by indigenous peoples, but there was very little evidence of human occupation in the tunnels. The smoothness to the tops of the tunnels suggested that something big was moving through these tunnels. And enormous claw marks in the sides of many of the tunnels indicates that this something very big was digging them. The claw marks give evidence to the makers: South American Pleistocene mega-fauna was impressive, but the claws of Giant Ground Sloths and Giant Armadillos matched the marks on the walls. No one knows why were they digging such huge burrows. Some had chambers at the end, indicating a nest. Burrows are used by many animals to bring up their young and protect them and baby Giant Ground Sloths would have been much more vulnerable than the adults. 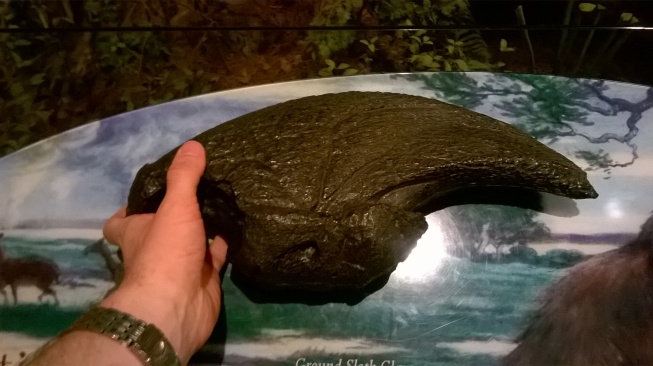 The hand of yours truly on one claw from the North Carolina Giant Ground Sloth. This was just one claw. It was enormous!! (Photo by Jan Freedman. Taken at North Carolina Museum of Natural Sciences)

Sloths, Ediacaran fossils, dinosaurs, worms and the Gopher tortoise. These and many other examples of creatures both past and present open your eyes to how amazing life actually is. You know Martin loves burrows. It leaps from the page like the dirt kicked back by a gopher tortoise. Many people would find burrows, especially obscure fossil burrows, dull. Martin brings them to life, so much that you can visualise the creature making them as you read.

It was not because I am a total geology geek that I really enjoyed this book. It has everything you want in a popular science book: full of facts and information, well written, jokes to keep you on your toes, and stories to bring the pages alive. I loved Martin’s figures in the book and his non-standard scales for the images, which readers would easily relate to.

It was wonderful to see some fun figures in this book, including this Cave Bear den with a scale inspired by our very own Rey. (Image used with kind permission from Anthony Martin)

This was quite an achievement of writing: Martin covers the natural history of burrows over the last 550 million years giving some very well deserved air time for these normally ‘unsexy’ trace fossils. Not only will you discover about some quite fantastical creatures that once walked across the land, you will look at the world differently. So many animals rely on burrows for protection, warmth, mating, bringing up the young, or even simply using another animals burrow as their home. Many animals have actually survived disasters because they live in burrows.

Burrows are not seen, and so are often forgotten about. Next time you are on a walk have a look. Not just for animals scurrying about, but for the evidence they leave behind: foot prints, scat, or even a burrow.

2 Responses to The Evolution Underground