It’s funny when you think about it. Canids famously have a swimming style named after them but they hardly ever made it to any islands. Compared to elephants, hippos, and tortoises and the ease with which they seem to have colonised remote archipelagos, dogs don’t seem to have strayed far from land. Except when moved by people. Natural colonisations are few and far between and more likely to be the result of getting stranded after sea level rise (think of the grey foxes of the California channel islands or the extinct Falkland islands wolf). One exception that breaks this rule lived in Pleistocene Sardinia, a Mediterranean island that has never been connected to the mainland. In amongst the dwarf hippos and dwarf elephants that populated many med islands, the Sardinian canid is an anomaly. It’s not even a wolf, the one wild European canid that people are familiar with. It’s something different. Something from a separate branch that until the Holocene was a vital part of the European fauna. Sardinia had its own dhole.

Dholes are the “Red Dogs” of Kipling’s Jungle Book: fierce and efficient killers that today live in Indonesia and Mainland Asia. Looking like a red fox on steroids, dholes are pack animals that can easily take down buffalo and deer. In the Pleistocene they were also common in Europe, and roamed even into North America*. 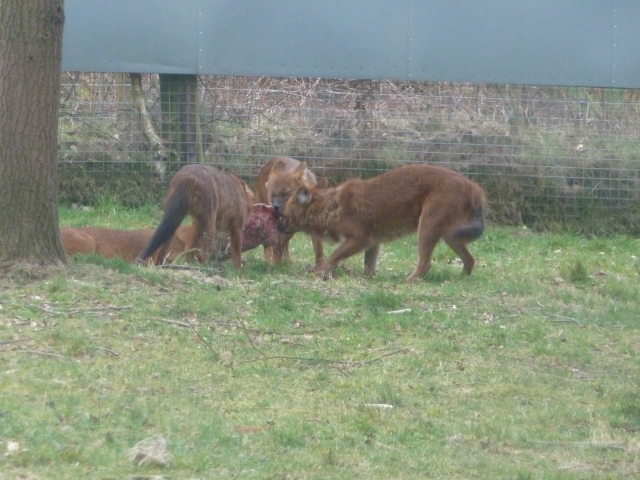 Sardinia’s dhole, Cynotherium sardous, is not a direct relative of the modern dhole, Cuon alpinus. Instead it probably shares a common ancestor with the dholes and painted dogs (Lycaon pictus). This ancestral form, Xenocyon lycaonoides, was widespread in Europe during the early Pleistocene and presumably doggy paddled its way to Sardinia. At the point in time during the Pleistocene, Corsica and Sardinia were joined into a larger island due to lowered sea levels. On arrival, Xenocyon found itself in an insular environment bereft of large prey animals. Instantly, natural selection worked its magic and strong selection pressure started favouring smaller individuals who could more efficiently hunt small prey, and required fewer calories to reach maturity. It’s a classic example of the island rule. The big get small and the small get big. Remarkably consistent across elephants, mammoths, hippos, deer, rodents, birds, and yes, humans too. The famous hobbit (Homo floresiensis) of Flores shows what happens to large human like species under the selection regime of an isolated island.

Size was just one aspect modified by natural selection in the Sardinian dhole. Luckily we have a very good series of fossils from the skull and post-cranial remains of many individuals to look at. They clearly show other adaptations that are unique among canids. Firstly, the neck bones show signs of being extremely flexible and hyper-strong. Additionally, muscle attachment scars show that the shoulder had a wide degree of freedom of movement and that the triceps were enormous. The triceps is the muscle that does the opposite job to the biceps- it’s the muscle you would use when pushing yourself up off the ground during a push up. It’s the one that extends the arm. All this points towards an animal where explosive leaps from a stalking stance allowed it to quickly grab and shake small prey to death.

The end result of island dwarfing for the Sardinian dhole was a reduction in size to an estimated 10kg in the latest adult specimens known. Despite ruling their tiny kingdom for most of the Pleistocene, they seem to disappear around 11,000 years ago. Just when humans arrive on the island.

*Bizarrely, dholes are known from Beringia, and one site in Mexico (San Josecito cave). The fossils are super diagnostic so there can be no doubt that they are what they are but that’s one hell of a geographic gap for what must have been a widespread species. Really makes you think about the gaps in the fossil record.

4 Responses to On the dhole