Posted on October 16, 2019 by twilightbeasts

If you think of the weirdest mammal you can, chances are a tapir would pop into your mind. They are pretty odd. Kind of like a mad-scientist’s experiment between a pig and an elephant gone wrong.

Perhaps naively, I had always assumed there was just one species, the tapirs living in the Amazon (Tapirus terrestris, the Brazilian tapir). I learnt that there are actually four different species in all, and they are not just found in Brazil. Baird’s tapir (T. bairdii) can be found across Mexico and a few countries in the north of South America. There’s the mountain tapir (T. pinchaque) of South America, with it’s woolly shaggy hair covering it to keep it warmer in the cooler mountain ranges. And the Malayan tapir (T. indicus), the last surviving tapir from Asia. All these beautifully-strange species are vulnerable to extinction.

Tapirs are full of really neat features. My favourite, and the most diagnostic, is that large nose: it’s proboscis. Much more flexible than an elephant’s, it can move in any direction to grab onto branches to eat leaves. Large, splayed toes spread the body weight allowing these fairly large mammals to live in wet, boggy, muddy environments. Being mostly nocturnal, their eyes are cloudy-looking and they have rather poor vision. That large muscle protruding from their face makes up for it: tapirs have an excellent sense of smell. They use it to search for food or for a mate. Tapirs will mate in water or on land, and they can mate several times whilst the female is on heat, for a rather modest length of time – between 10 and 20 minutes. (In humans, the average is somewhat disappointing: around 6 minutes. I hasten to add that this is an average.)

Closely related to rhinos and horses, the first fossils of the tapir family (the Tapiridae) are found in 50 million year old rocks in North America. They were a hugely successful group. Several species evolved, and they spread far across the northern hemispher. During times of low sea levels, species made their way over into Asia, and even Europe. Around 2.9 million years ago, when North and South America joined together, tapirs made their way into South America for the first time. 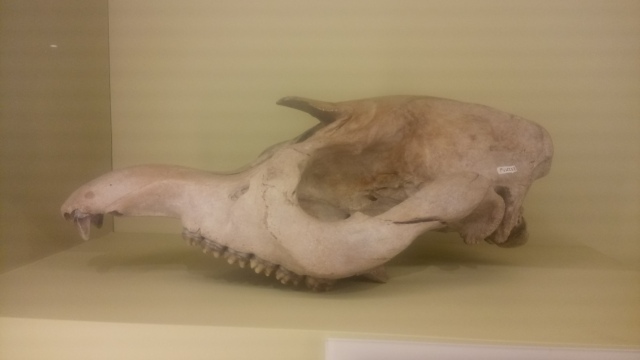 Fossil tapir skull found in South Carolina. On display at Charleston Museum. That large hole in the head is the nasal cavity, and supports the flexible but short trunk. (Image Jan Freedman)

With so many species in the last 50 million years, it is no surprise that there was an enormous one, Tapirus augustus (sometimes referred to as Megatapirus augustus). This was a ruddy big tapir, around 1.5 metres tall, and 3 meters long.

The giant tapir, Tapirus augusus, was almost as tall as a human. (Image Twilight Beasts)

A plethora of fossils across Asia give us an evolutionary story for this giant. Huge grasslands across Asia during the early Pleistocene, around 2 million years ago, would have helped the spread of tapirs across the continent. A population of one species, T. sanyauensis, appears to have increased in size in the Early to Mid-Pleistocene, the ancestor of T. sinensis. A few hundred thousands years later, a population of T. sinensis was isolated from other populations and continued to get bigger, and during the Mid to Late-Pleistocene we see the giant T. augustus. This is a very simplified story, and in reality many isolated populations just carried on without changing much, whilst others died out. Evolutions isn’t a neat ladder leading from one species to another: it’s a very busy, very complicated tree.

We know a bit more about the giant tapir thanks to a myriad of sites across China hold fossils being found alongside hominins, so they are well recorded and published. Fossils of Homo erectus have been excavated at Gongwangling in Eastern China, dating between 1.15 and 1.63 million years old. Their landscape was share with some species found in the region today, along with extinct deer, huge hyenas, long-vanished rhinos, and the giant tapirs. Human teeth were excavated at Huanglong Cave in Eastern China, dating between 100,000 and 40,000 years old. Along with several human teeth, likely belonging to our species H. sapiens and not H. errectus, stone tools have been recovered along with over 25 different species of large mammals. Species of extinct rhinos, deer, proboscids, hyenas, and the giant tapir have all been found. Many of the bones are fragmentary, indicating that this cave may have been a home for groups of H. sapiens at some points in the past. And these groups may have been bring food back to this cave, giving a glimpse into the range of animals they ate.

From the species found at these sites, we can work out the likely environment that the giant tapir lived in. The assemblages indicate that the environments were not much different from the region today. These giant tapirs lived in warm, sub-tropical forests.

Our giant tapir was around until relatively recently, shuffling in the forests of Asia until just around 4000 years ago. It’s difficult to identify exactly why they went extinct. Humans have been suggested as the cause of the extinctions of many large mammals, but here, humans (H. erectus and H. sapiens) and giant tapirs overlapped for hundreds of thousands of years. Yet there is evidence that they were food in the past, just as the four species are hunted by humans today. Habitat loss from changing climate or destruction by humans for farming may have played a role. Or it may have been a combination of both. For large mammals, with slower breeding than smaller ones, these pressures happening unnaturally fast will have had an impact on populations.

Tapirs and humans have had a long history of living alongside one another. And they are very symbolic in some cultures. In some Asian countries, there are stories of tapirs eating nightmare’s. It’s an interesting and quite scary bit of folklore, but quite unusual for a herbivorous animal. It’s not difficult to imagine it’s origins, as stories were told round a fire, with the rustle of leaves close by. The flickering flames briefly lighting the well camouflaged, weird shaped body of a tapir. With their solitary lifestyle, tapirs are a little bit mysterious. I like to imagine what it must have been like to hear that rustle in the forest of a giant tapir passing by a group of people quietly telling stories.