Posted on March 8, 2019 by twilightbeasts

Armadillos are pretty cool animals. They’re pretty weird too. They kind of look like odd small pigs, with crazy sharp claws. What’s more, they are covered in a pretty tough armour topped in even tougher scutes. The scutes alone are pretty spectacular. Think of a carrot cake topped with cream, only the carrot cake is solid bone, and the cream is horn: a unique adaptation in the animal world. This protection covers their back, on the top of their heads like a helmet, and even overlapping rings covering their tail. What is quite amazing, is that unlike their ancient relative, those giant glyptodonts, who are covered in a huge solid shell of scutes, the protection covering the backs of armadillos is in bands. And this means that their bodies are much more flexible. If threatened, these bizarre looking creatures will suddenly curl up into a ball: a perfect, solid, impenetrable ball. They are almost invincible (apart from cars, humans, and climate change). The armour is so strong that recently a man tried to shoot an armadillo, and the bullet ricocheted off it and hit him! (Karma).

The nine-banded armadillo in Florida. These remarkable animals are covered head to tail in super-strong armour. (Image Public Domain)

Regular readers wouldn’t be surprised to hear that until fairly recently there were some darn big armadillos. And this is their story.

The unseen, never slowing, forces below our feet, those tectonic plates that all oceans and land float upon, are powerful enough to rip continents in half. And this is what happened around 140 million years ago. South America and Africa were once joined together until the tectonic plate it sat on split into two. (Have a look at a map and you will see that South America and Africa fit together perfectly like a jigsaw. In fact it was this jigsaw that helped lead to the theory of plate tectonics, or continental drift, by Alfred Wegener in 1912, and was proved true by seismic and magnetic observations in the 50s.)

Back to our story. Here was one massive island, cut off from the rest of the world for a very, very long time. The animals that were trapped adapted and changed in isolation: in a constantly changing environment, they competed against each other in a brutal daily race for survival.

Of all the myriad of forms that evolved in South America, the armadillos are one of my favourites. With 21 species around today it is a relatively large family, including the more familiar nine-banded armadillo, the adorable pink fairy armadillo, and the slightly terrifyingly named screaming hairy armadillo. Perhaps surprisingly, the closest living relative of our adorable, shelled friends are the ever-lovable sloths, both belonging to the group Xenarthra. Diverging around 65 million years ago, the armadillos went on their own evolutionary path, and the sloths slowly went their own way.

Early armadillos faced many pressures from predators and environmental changes. To adapt and survive, some populations branched off, evolving into new beasts. Around 47 million years ago, some early armadillos took advantage of eating tougher vegetation, and getting bigger, evolving into a new family of large creatures, the Pampatheriidae. Evolution isn’t simple. Nor is it neat. There is no ladder of progression only a crazily bushy tree of new species branching off while old species either carry on living for millions of years or succumb to the pressures around them. There is nothing preordained. Just luck. The right trait at the right time. The environment is in control. And if animals cannot adapt, they die.

With several genera (containing over a dozen species), the Pampatheriidae were a pretty big family. One genera in particular had some of the largest armadillos: Holmesina. There were six species, H. floridanus, H. occidentalis, H. major, H. paulacoutoi, H. rondoniensis, and the largest of them all H. septentrionalis. Their teeth show that unlike today’s armadillos, who gorge on insects, Holmesina ate tough plants. Eating hard plants would have worn down teeth very quickly and would be a problem for us if we were to change our diet. But these extraordinary giants had a pretty neat adaptation: ever-growing teeth, like a rodent. There was no fear of them wearing down.

One of the largest of the pampatheriidae, Holmesina septentrionalis, compared to a 6 foot tall human.

Modern armadillos have big strong claws which they use for digging up grubs and making burrows. The burrows are their homes, providing a little cosiness from the external weather, and safety from predators for the youngsters. Holmesina too had large claws. They may have used these to dig burrows. There have been some exceptionally large burrows discovered on rocks in South America. Burrows dug into rock! These have been attributed to giant sloths and glyptodonts by matching the tunnel size and the claw marks left in the walls. Holmesina may have preferred softer soil. Or it could be that we haven’t found their burrows in rock. Yet.

The beautiful foot of Holmesina septentrionalis in the collections at Florida Museum. (Photo kindly reproduced with permission by Rachel Narducci)

After million years of isolation, something happened that would have a huge impact on all life on that huge isolated land. Massive underwater volcanic eruptions created a land that connected North America to South America. The Isthmus of Panama is a true land bridge. For the first time in over 137 million years, species were able to move between the two continents. Sabre tooth cats, Gomphotheres, horses, and many more moved into South America from North America. And species moved from South America northwards too, including terror birds, toxodon, giant sloths, glyptodonts, and our giant armadillo, Holmesina. With this new movement of species, there was extra pressures on the endemic animals, with new predators hunting prey that had no defences. Holmesina, it appears, did fairly well. Numerous fossils have been found in Texas and Florida, as well as it still thriving in South America. They were the most widely distributed pampatheres. 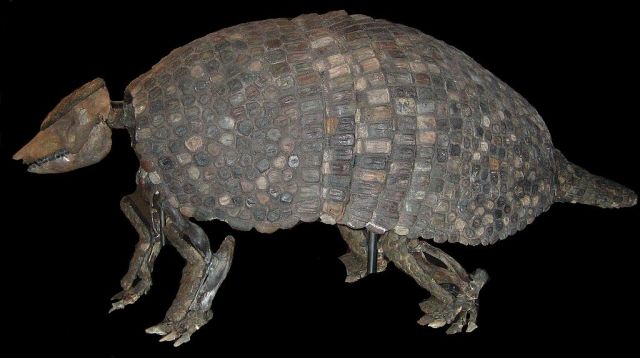 Their extinction is an enigma. Fossils hint that the last Holmesina were around until just 11,000 years ago. This coincides with other large scale extinctions of megafauna across North America. Humans have been implicated as the cause for many of these glorious giants vanishing. And there are some signs that humans definitely interacted with them, including spear points found in embedded in bones, and cut marks on bones. But Holmesina? There are currently no fossils found showing that humans interacted with them. No roasted giant armadillo on the menu. No manipulated Holmesina shells for homes or body armour (which would have been fascinating to see). If modern armadillos are anything to go by, they would have been pretty difficult to kill, although the youngsters may have been easier prey.

So what happened to them? It is difficult to say for sure. They were pretty specialist creatures, and the more specialised an animal is the more vulnerable it is to rapid changes in the environment. We know that the climate was undergoing global scale changes, with the glaciers covering most of the northern hemisphere shrinking back and new types of vegetation replacing the old. It is more than likely that these changes had a big effect on our giant armadillo.

The Pleistocene was full of amazing creatures. Some so weird that they would have been baffling to see today, like the massively bizarre Toxodon, or the weird trunked horse-like Macrauchenia. But others strangely familiar, like the enormous Columbian Mammoth, or the giant armadillo. To have seen a giant armadillo would have been a magnificent sight. And to witness one roll into a ball? Well that would put a smile on anyone’s face.

Thank you to Rachel Narducci, at the Florida Museum of Natural History for her feedback on an early draft of this post. (Follow Rachel on Twitter for some cool research with pampatheres: @renarducci)