Branching out!! A review of The First Foresters: explore the Neolithic in Scotland’s Native Woodlands by Kim Biddulph and Matt Ritchie.

Do you remember your first time? The first time you realised the millennia which had existed before you, I should say!  Maybe it was standing on a hill and looking onto a landscape below scattered with raths and mounds, or perhaps a family trip to some rugged moorland, where silent grey stones maintained their tolerant silence no matter how many times you climbed on them. Or perhaps it was a random flint arrowhead or fossil found, in river or at seashore, holding time in the palm of your hand. Do you remember that fleeting moment when you felt the weight of the ages which came before you, as soft as a feather on impact, but leaving your imagination racing,  when you realised that  people far beyond your grandparent’s time had lived, loved, worked, died, believed things we knew nothing of and lived a very different life. And yet… were they so different?

That is a moment many of us have no coming back from, and it’s important. The wonder of the child spills into a lifetime of curiosity in palaeontology, palaeoecology and archaeology. This is why it is important, in this post-truth time of rewritten false pasts, to establish clear and critical thinking in a way children can deal with, while also appreciating and marvelling at the past. So, I call exhibit A , which demonstrates a clever and lively way forward, providing a strong emphasis on the skill of storytelling, of being out of doors, respect for nature and the forest, plus connecting with our ancient past. I present to this blogging jury The First Foresters: Explore the Neolithic in Scotland’s native woodlands by Kim Biddulph and Matt Ritchie.

Quite simply, nobody does archaeology and environmental awareness and promotion better than Scotland, and this project is a joint venture between Archaeology Scotland, Outdoor and Woodland Learning and Forestry and Land Scotland. Kim Biddulph is no stranger of course to the Beast Team, having had us on her podcast talk about all sorts of things, but mostly Jean Auel books!  You can listen to that one right here but she’s also active in many educational facets of British archaeology.

Matt Ritchie was responsible for the highly imaginative and creative commissioning of this book. He is an archaeologist and National Environment Advisor for Forestry and Land Scotland. His ‘ordinary’ (does that word apply to archaeology? I’d argue no!) work involves the protection, conservation and presentation of the historic environment in Scotland’s national forests. There was also extra input from Dr Gavin McGregor and Ingrid Shearer of Northlight Heritage. The lavish illustrations  are by Alan Braby and Alice Watterson, photography by John MacPherson, and a set of very human characters created Alex Leonard and Kim Biddulph. The linocut artwork is by Liz Myhill, while the maps and plans were drawn by Headland Archaeology. The ubiquitous National Museums Scotland contributed images of stone axes.

Meet the Neolithic family! The clan created by Alex and Kim to tell the story of the first farmers of Scotland.

The text is primarily for use with Level 2 children (that’s ages 7 to 11 for other parts of the world) under the Scottish Government’s Curriculum for Excellence education manifesto. That being said, a tweak here and there could be applied to the material and probably engage awkward Freshers to have some getting-to-know-you fun in a seminar.

The 1500 years of the Neolithic, from around 4000 BC to 2500 BC, is one of the most important historical phases in European human history, as it is the period when the Twilight Beasts of these islands truly did fade into legend. New ways of living came lapping onto the land, as steadily as a rising tide.  Humans became settled in one place, adopted agriculture, destroyed forests to claim farming land, and animals became domesticated. This period redefined the Mesolithic relationship with creatures and the environment.

One of my own photos of the Neolithic stones of Kilmartin Glen, a timeless place where sheep still graze, just not the same breeds! For a bit more on Neolithic sheep types, try here

This little book contains a potent emphasis on environmental awareness, incorporated with attention to structures and material culture, such as timber circles and cursus monuments of the Neolithic, as well as polished stone axe heads, before challenging the participant to enter into a Neolithic mind-set – and asks is that even possible in the modern world? That’s surprisingly deep question that most adult experimental archaeologists will sigh, shrug and smile wryly at. Not a bad idea to make kids realise that we cannot ever step in the same river twice! My personal favourite activity is the construction of a wooden circle in class. I remain slightly relieved that my own daughter is not an age where this would have caught the imagination too far, and I’d have woken up surrounded by a ritual mound of books and shoes… though you never do know! It’s an activity I could see being incredibly useful , with a  few more analytical tweaks, to the average First Year undergraduate archaeology student.

The section dealing with the Neolithic mind allows an exploration of what is believed, and why, and how cultures and ideas change. It explores in an easy to understand manner how Neolithic land use brought rules connected to the cycles of growth, tethering humans as much as animals to domestication, and how forests represented primeval, uncontrollable forces. This may well be very different from the earlier hunter-gatherers of the Mesolithic, who followed more fluid rhythms of nature set by the movement of creatures. The text also acknowledges, humans being the contrary being they are, that there were also groups who didn’t quite conform to either 100% Neolithic or Mesolithic trends! 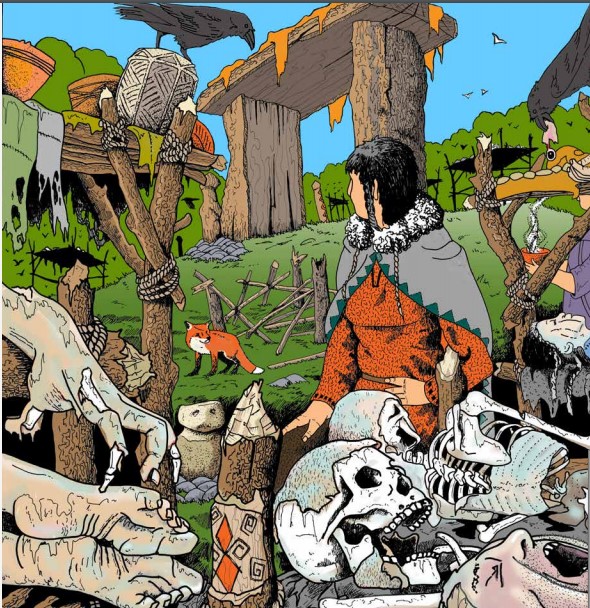 One of the wonderful illustrations by Alan Braby, coloured by Ian Kirkwood, of a defleshing platform. During the Neolithic, bones were likely picked at open air sites ( The Giants Ring at Ballynahatty, outside Belfast, is one such site), then the clean bones were interred in cairns, elsewhere. Look at the little ‘Westray Wife’ figure in the midst of all this!

The book also presents a very welcome realistic expectation and explanation of what archaeologists actually do, which of course can make young’ns consider it as a genuine career choice. There’s a strong emphasis on the skill of storytelling, of being out of doors, respecting nature and the forests, and directly experiencing the heartbeat of nature, faint though it may be in the modern world, drowned out by bleep and purr of smartphone and Chromebook.

Lavish illustrations are museum adventures waiting to happen, encouraging observation of objects on display – the little carved wooden idols, the pots and the stone axes. They are on the right side of imaginative and full of verve in their use of bright primary colours, reminiscent of a colouring book.

All in all, this book is a delight to introduce young folks to the environment, archaeology and how we interact with the past – and it with us. If you have young ones, use the book on walks and trips. They, and possibly you, may never look at the landscapes and forests of wherever you are without asking lots of questions and thoughts.

And do you want to know the best bit of it all? You can download it free of charge, gratis, for nowt, right here!

What are ye waiting for? Go get out of doors, and look for the Neolithic!

Other places to check apart from the links provided?

This entry was posted in Book review. Bookmark the permalink.

3 Responses to Branching out!! A review of The First Foresters: explore the Neolithic in Scotland’s Native Woodlands by Kim Biddulph and Matt Ritchie.