The End of the Ice Age

The end of the Ice Age. Around 10,000 years ago. This was not only the end of the last major glacial period where great glaciers spread across the northern hemisphere, this was also the end of so many incredible animals. Animals that were so fantastical as to belong in science fiction movies. Animals so stupendous as to be conjured by our imaginations. They were real. Enormous sloths. Humungous cats with sabres for teeth. Massive shaggy elephants. All real. And all walking, stalking, and stomping until very recently.

A new graphic novel by the talented Ted Rechlin, End of the Ice Age, transports you back to a time when these beasts were surviving. Rechlin takes you to north America to see how a family of Smilodon struggles to survive, and over 3000 miles across Europe to witness other species living on the colder tundra.

Life back then was not so different from life now. The animals had to eat to survive. Some animals had to avoid being eaten to survive. Just like animals do today. Living in cities, we are so far removed from the wild, that we often forget that this is a daily struggle for every species on the planet. Find food. Find a mate. Survive.

This book, with its gorgeous comic book style illustrations, opens up this world, making it as real as something today.

We are lucky enough to provide a little preview of the book for our readers below. Take a glimpse of the story. Of the powerful characters. Of the beasts. At the End of the Ice Age.

You can order End of the Ice Age here.

Ted Rechlin has done some other amazing art work on prehistoric life with the publisher, Rextooth Studios.

For more of Ted’s work read Just like the weather. 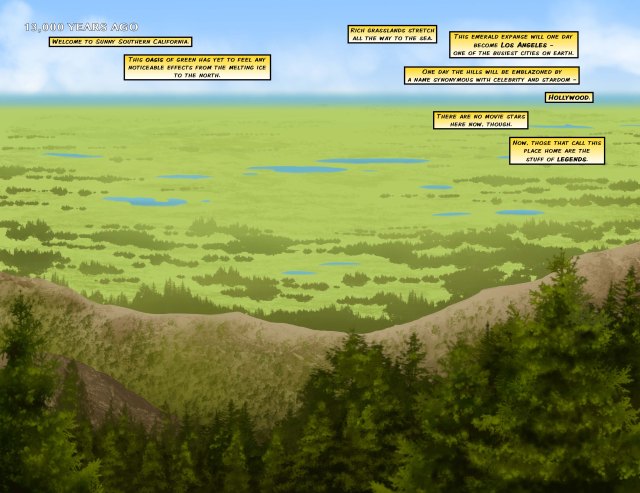 2 Responses to The End of the Ice Age