Posted on February 8, 2018 by twilightbeasts

“Life itself is a school, and Nature always a fresh study.”

Hugh Miller. Almost before I was aware of who I was, I was aware of who he was. From just after birth until the age of five I lived in the small Black Isle fishing town of Cromarty. It’s here that I first went to school, first made friends, formed my first memories. Hugh Miller is Cromarty’s most famous son. He was a stonemason. And a geologist. And a palaeontologist, theologian, journalist, poet, and folklorist. In fact, there was very little he couldn’t do. His presence is still palpable in Cromarty. The thatched cottage he grew up in is preserved, fossil-like, as a museum. The village retains carvings and sculptings that were done by his hand and can still be seen on houses that are now the homes of artists and bohemians. 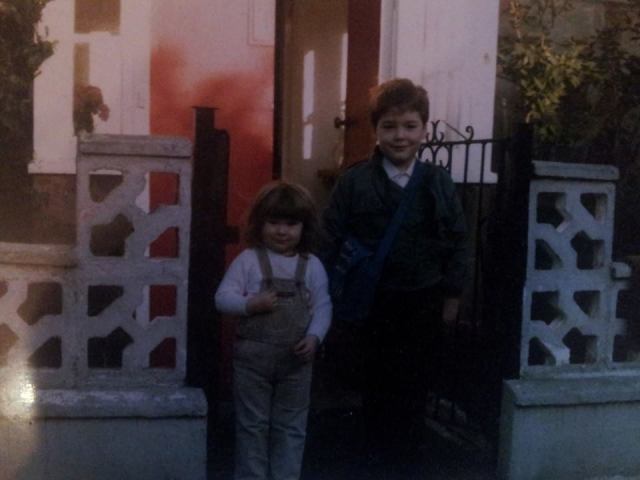 Above: Me and my younger sister outside our house in Cromarty. Below: The same house today. Photos ©the author 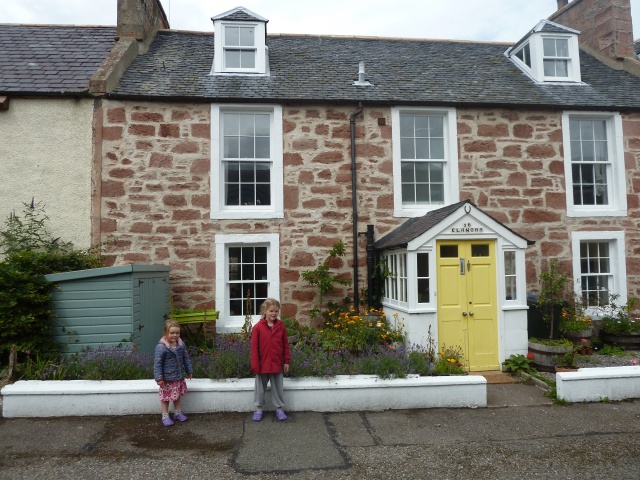 Miller was one of those 19th century geniuses that grew, like lichen on a cracked stone, out of the tumultuous struggle between revealed religion and the testimony of the rocks. At this time the North of Scotland was (some would say still is) a conservative and god-fearing place. Presbyterianism was in full swing and the schisms that heralded the birth of the Free Church were on the horizon.

Into this fertile landscape Hugh was born the son of a sailor. Many said his father was the best sailor in the village. He disappeared at sea when Hugh was five years old. In his best-selling memoir he describes a curious incident that happened at home on the day of the storm that sank his father’s boat. In the gloaming, while young Hugh was playing beside the open front door, he saw the apparition of a severed arm pointing towards him. Terrified, he ran to his mother for comfort. It was only later in the week that news of what had happened to his father made its way to the town. This early brush with decidedly pagan and unchristian supernatural forces encouraged a lifelong love of folklore and storytelling. Miller collected and anthologised these in his first book “Scenes and legends of the north of Scotland”. Even in my childhood I remember being entranced by my grandparents stories of second-sight and other classically Highland tales, typically told as things that had personally happened to friends they knew. Then as now in the Highlands there seemed to be no conflict between belief in the gospels and belief in the two sights. 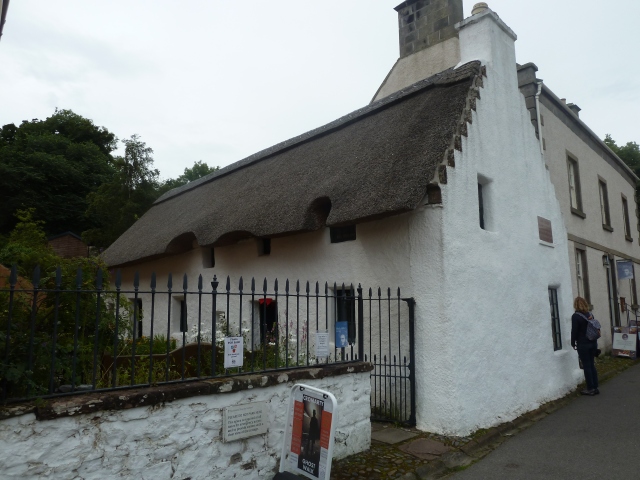 Miller’s most famous and long-lasting contributions were in geology and palaeontology. The area around the Black Isle has many good outcrops of Carboniferous, Silurian, and Devonian age rocks. Much too old for Twilight Beasts. This was a time of fish and amphibians, ammonites and eurypterids. Self-taught in the sciences, Milller’s careful observations and life-long collecting of fossils were a boon to students of the distant past. He wrote these up in massively popular works such as “The Old Red Sandstone”, “The Testimony of the Rocks”, and “Sketch-book of Popular Geology”. As a person who has spent more time than most reading 19th century works of science I can tell you that Miller’s prose is in a class of its own. It is hugely readable in a way that few scientists of that time managed. There is no pretension. There is no jargon. I would even go as far as to say his works are still a thoroughly enjoyable read.

“One of my discoveries of this early period would have been deemed a not unimportant one by the geologist. Among the woods of the hill, a short half-mile from the town, there is a morass of comparatively small extent, but considerable depth, which had been laid open by the bursting of a waterspout on the uplands, and in which the dark peaty chasm remained unclosed, though the event had happened ere my birth, until I had become old and curious enough thoroughly to explore it. It was a black miry ravine, some ten or twelve feet in depth. The bogs around waved thick with silvery willows of small size; but sticking out from the black sides of the ravine itself, and in some instances stretched across it from side to side, lay the decayed remains of huge giants of the vegetable world, that had flourished and died long ages ere, in at least our northern part of the island, the course of history had begun. There were oaks of enormous girth, into whose coal-black substance one could dig as easily with a pickaxe as one digs into a bank of clay; and at least one noble elm, which ran across the little stream that trickled, rather than flowed, along the bottom of the hollow, and which was in such a state of keeping, that I have scooped out of its trunk, with the unassisted hand, a way for the water.

I have found in the ravine–which I learned very much to like as a scene of exploration, though I never failed to quit it sadly bemired–handfuls of hazel-nuts, of the ordinary size, but black as jet, with the cups of acorns, and with twigs of birch that still retained almost unchanged their silvery outer crust of bark, but whose ligneous interior existed as a mere pulp. I have even laid open, in layers of a sort of unctuous clay, resembling fuller’s earth, leaves of oak, birch, and hazel, that had fluttered in the wind thousands of years before; and there was one happy day in which I succeeded in digging from out the very bottom of the excavation a huge fragment of an extraordinary-looking deer’s horn. It was a broad, massive, strange-looking piece of bone, evidently old-fashioned in its type; and so I brought it home in triumph to Uncle James, as the antiquary of the family, assured that he could tell me all about it. Uncle James paused in the middle of his work; and, taking the horn in his hand, surveyed it leisurely on every side. “That is the horn, boy,” he at length said, “of no deer that now lives in this country. We have the red deer, and the fallow deer, and the roe; and none of them have horns at all like that. I never saw an elk; but I am pretty sure this broad, plank-like horn can be none other than the horn of an elk.” My uncle set aside his work; and, taking the horn in his hand, went out to the shop of a cabinet-maker in the neighbourhood, where there used to work from five to six journeymen. They all gathered round him to examine it, and agreed in the decision that it was an entirely different sort of horn from any borne by the existing deer of Scotland, and that this surmise regarding it was probably just. And, apparently to enhance the marvel, a neighbour, who was lounging in the shop at the time, remarked, in a tone of sober gravity, that it had lain in the Moss of the Willows “for perhaps half a century.” There was positive anger in the tone of my uncle’s reply. “Half a century, Sir!!” he exclaimed; “was the elk a native of Scotland half a century ago? There is no notice of the elk, Sir, in British history. That horn must have lain in the Moss of the Willows for thousands of years!” “Ah, ha, James, ah, ha,” ejaculated the neighbour, with a sceptical shake of the head; but as neither he nor any one else dared meet my uncle on historical ground, the controversy took end with the ejaculation.

I soon added to the horn of the elk that of a roe, and part of that of a red deer, found in the same ravine; and the neighbours, impressed by Uncle James’s view, used to bring strangers to look at them. At length, unhappily, a relation settled in the south, who had shown me kindness, took a fancy to them; and, smit by the charms of a gorgeous paint-box which he had just sent me, I made them over to him entire. They found their way to London, and were ultimately lodged in the collection of some obscure virtuoso, whose locality or name I have been unable to trace.”

What could young Hugh have found? Was it an elk [moose]? Miller does not leave much by way of description but we can compare our more complete modern knowledge of the extinct deer of Britain to what he found. 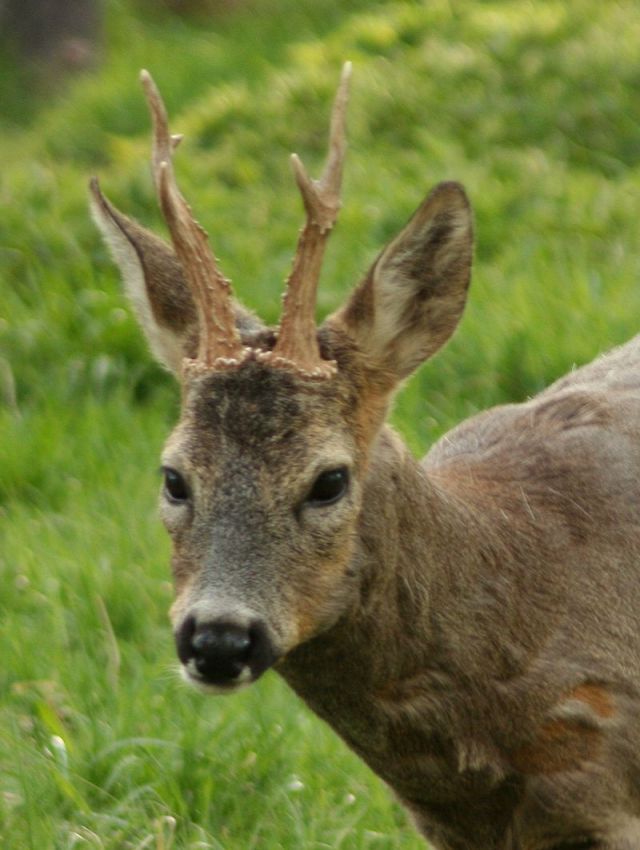 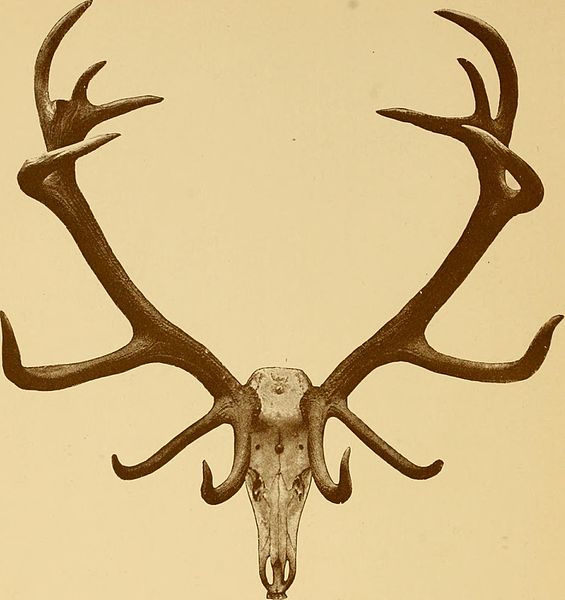 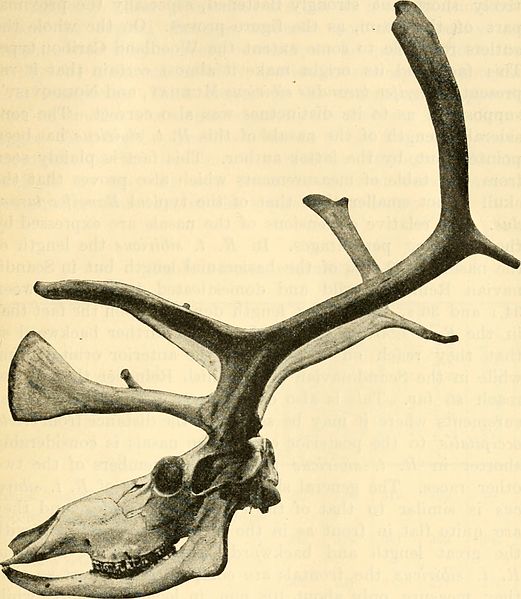 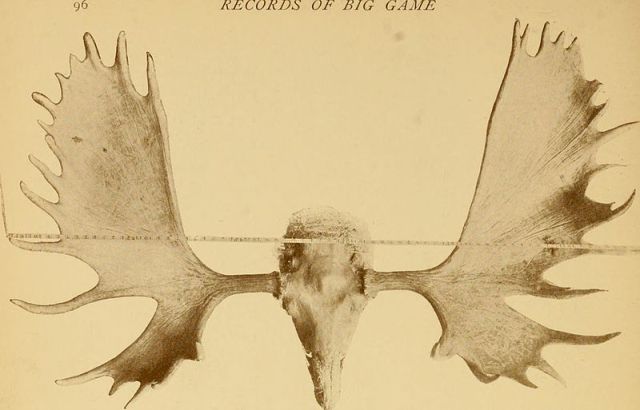 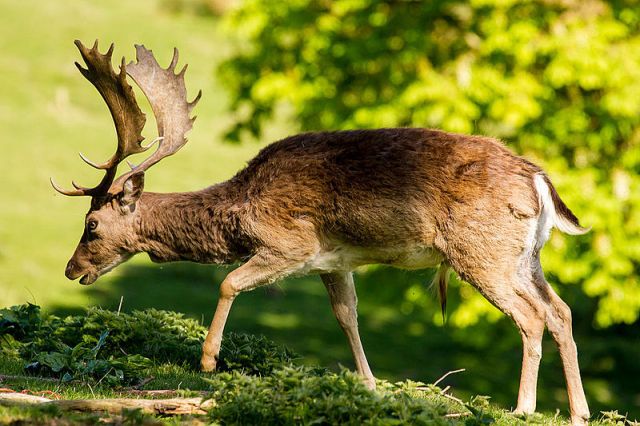 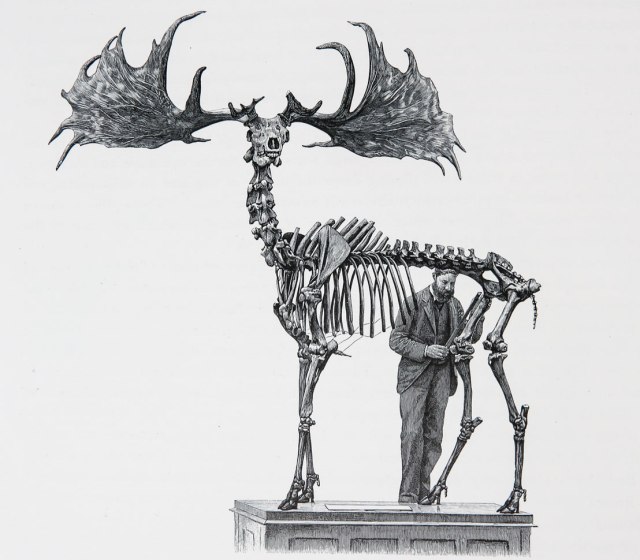 As well as the red (Cervus elaphus), roe (Capreolus capreolus), and fallow (Dama dama), we now know that Britain also used to have the reindeer (Rangifer tarandus), moose or elk (Alces alces) and giant deer (Megaloceros giganteus). Now, if this was a broad, palmate kind of antler then we can immediately exclude everything except the fallow, moose and giant deer. Hugh’s Uncle James- a man of considerable learning- discounted the fallow deer as a possibility, so that leaves only the moose and giant deer as contenders. I think we can discount the giant deer as well since it is last known in Britain from the late Pleistocene, a time period when northern Scotland was under a mile of ice. The reality is there are very few Pleistocene fossils known from northern Scotland. The only exception I can think of are from deep within caves on the northwest coast. The bone caves of Inchnadamph held their silent quarry safe from the ice thanks to the protective rock walls. Scotland is, however, rich in Holocene fossils from after the great ice retreated. Bears, wolves, lynx, beavers and other lost species are recorded from Neolithic to Iron age times. Some, even later than that. Let us assume that what young Hugh found really was a moose antler. How late did they survive in Scotland and how old would it possibly have been?

Like the aurochs, moose lived until pretty late in mainland Europe. Caesar mentions something that is probably moose in the Hercynian forest of Germany. Some data suggests that they lived in northern Germany up until medieval times. In Britain they probably died out before the Roman invasion. In argument for a later, even medieval survival, are claims that there are specific gaelic names for the moose. Since gaelic speaking scots only came over from Ireland in the 4th or 5th century AD this seems unlikely. However it’s possible they knew about moose from contact with Scandinavians, who still have moose today. There really is not much information on British moose out there. Someone needs to implement a comprehensive radiocarbon dating project to get to the bottom of this.

All of this points to the idea that Hugh’s antler was probably a moose from the first or second millennium BC at the latest, making it three or four thousand years old when it was dug up by young Hugh, and that his Uncle James was correct in every detail.

There is a delightful postscript to this story. A few years ago, within a brisk days walk from  Cromarty, a moose calf was born. At the Alladale estate in Sutherland a pair of Scandinavian moose were brought over as part of the owner’s ambitious rewilding project. Hulda and Hercules (as the pair were called) gave birth to the first Scottish moose to be seen for at least three thousand years in 2011. I think Hugh Miller would have been thrilled.