Posted on December 11, 2014 by twilightbeasts

Dogs. (Hu)man’s best friend. For around 15,000 years, these furry, sensitive canines have been our close companions. All dogs alive today descended from a wolf ancestor into a massive array of variations today; from the laughable but slightly cute Chihuahua, to the unbelievable enormous Great Dane. Around 35 million years ago, a small group of Canidae in North America branched off from the main family, evolving into a new sister group, the SubFamily Borophaginae. These were dogs, but different; they had an awesome name. These were the ‘bone crushing dogs’.

The Borophaginae were a very successful split off group to the Canidae. Running around for over 33 million years, on five toes, instead of the modern dog equivalent of four, this group had at least 28 Genera and 66 different species, and were the most dominant predators across the isolated continent of North America. This impressive diversity, and longevity, resulted in some awesome animals. There were some, like the massive Epicyon, which were as big as a bear, and others, like Strobodon stirtoni, which mimicked cats. The group survived solely in North America until into the very dawn of the Twilight, around 1.8 million years ago.

A gorgeous illustration of Borophagus (possibly B. diversidens). Illustrated by the ultra talented palaeoartist Charles Knight in 1902. (Image from here)

The last of the bone crushing dogs was our beast, Borophagus diversidens, which survived into the beginning of the Pleistocene after a long, successful reign of around 5 million years. The Borophaginae were unknown before the discovery of this species in 1892. Famous for naming of a plethora of new dinosaur species, Edward Dinker Cope also discovered and named many other types of animals. Including mammals. Based on just one fragment of a jaw, with a few teeth, found at the Blanco Formation of Texas, Cope described not just a new species, or even Genus, but a whole SubFamily. Since then many more fossils have been found, showing its range from Mexico all the way up to Canada. And of course, more fossils mean a greater understanding of this extinct creature, which was (as far as we know) the last survivor of this highly successful group of dogs.

This was no beauty. Not really even a runner up in Crufts. With a bulging forehead, and short powerful jaws, it was about the size of a large fox, but with more robust bones. The teeth were the key feature for this species; the premolars were huge. These teeth were made for crushing and crunching, and that’s just what they did. Because of their strong, powerful jaws, and massive, thick teeth it has been assumed that these were scavenging animals filling a niche in North America as the spotted hyenas do today in Africa. Only we know that the incredible spotted hyena, which was was more widespread during the Pleistocene is also a formidable pack hunter. B. diversidens is a very common fossil at numerous sites, indicating a very successful animal. Huge numbers of British sites hold a myriad of hyena remains showing that caves were used as family dens; could this bone crushing dog have been a family animal and pack hunter too? 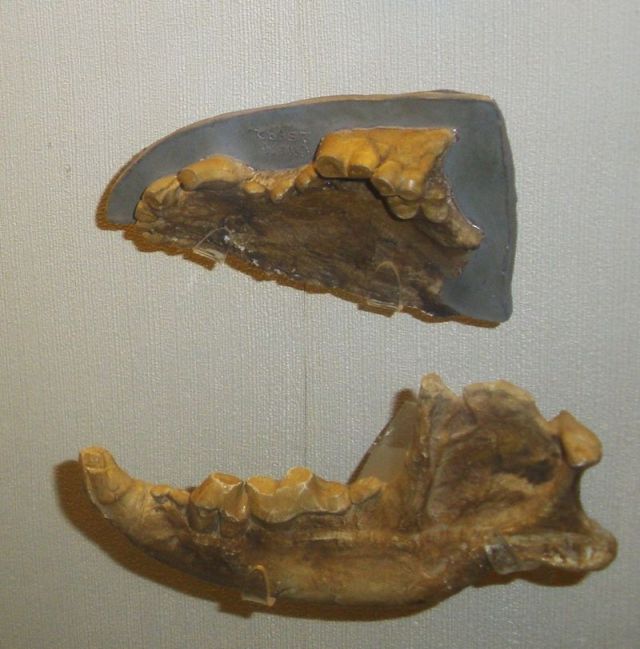 Fossils of Borophagus diversidens. The premolars are huge, similar to the spotted hyena today.(Image from here)

As was the way with naming new species based on just one fossil fragment, it has lead to confusion, renaming and reclassifying. Since it’s initial discovery, Borophagus diversidens has had seven different names! When palaeontologists find fossils, they compare it to other known fossils to try and identify it. If there is enough difference, they may name a new species. However, if a palaeontologist finds a fossil, but there is nothing to compare it to, then a new species may be named. This is one of the major problems with naming new species based on individual specimens. But, as more fossils are found, and more complete specimens, other fossils can be checked and reassessed. When more complete fossils of B. diversidens turned up, those seven other species became redundant, and were reassigned to its rightful owner.

The last of this great side line of dogs occurred around 1.8 million years ago. After a huge variety of different species, and being successful for over 33 million years, the end of the bone crushing dogs came swiftly. Humans were not to blame for the extinction of this species, for once. Around this time, the climate was changing in North America, resulting in less prey. There were plenty of other predators around, including species of Smilodon and the American Hyena but they had their niches which differed from the bone crushing dog. There was also a new predator on the scene. It appears that another canid species which can trace its blood line back 33 million years to when they last shared a common ancestor may be to blame. Dire Wolves (Canis dirus), recently made popular by the Sigil of the Starks, evolved in North America around the same time as the decline of the last bone crushing dog. These were big predators, which were very likely social animals which would have hunted in packs. With addition pressures from a faster, bigger predator, it seems our little beast slunk away into history.

Wang, et al. (1957), ‘Phylogenetic systematics of the Borophaginaw (Carnivora, Canidae)’, Bulletin of the AMNH. 243. [Abstract only]