Posted on July 9, 2014 by twilightbeasts

Owl sick is full of exciting surprises. Many birds of prey (owls, kestrels and sparrow hawks for example) will cough up fur balls full of bones. These silent predators struggle to digest the hard parts of the little creatures they feast upon, so they cough them up. Today, as in the past, owls often use caves as their base resulting in the cave floor covered with regurgitated tiny bones of their recent meals. This, for a Quaternary scientist, reveals a lost world of little furry mammals that lived within close proximity to the cave sites. Excavated cave sediments can contain hundreds of thousands of tiny bones and teeth, which can be identified often to the species level. And these can provide clues to some of the more unfamiliar Twilight Beasts. 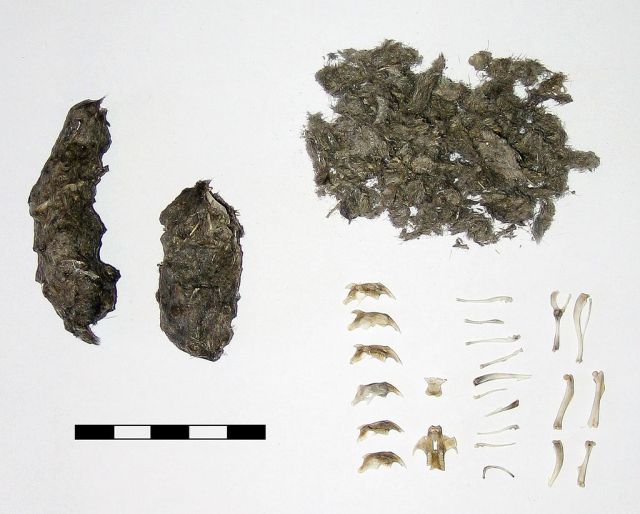 Owl pellets hold the clues to the awesome little creatures living around the owl’s home. (Image from here)

Often the smallest animals are left on the sidelines. Ignored and perhaps forgotten, their diminutive size does not take away any of their awesomeness. And freaky awesome the Great Jerboa is.

Sitting comfortably in the palm of your hand, this furry little creature looks like a miniature kangaroo with enormous ears and belongs to the unusual family of jumping rodents (Dipodidae). Today Dipodidae are a pretty successful little group, with 33 different species, found through northern Africa, and across Asia. Hoping around on three elongated toes on their hind legs, they are at home in very cold or very hot desert environments. These nocturnal little creatures scurry around in the dark, digging for insects and bulbs to eat. Some species hibernate in colder periods, sometimes together in small groups to keep each other warm.

The Great Jerboa (Allactaga major) is the largest of the Dipodidae. Today, it can be found in Russia and a few countries just to the south. Towards the late Pleistocene, however, this cute little mammal had a much larger range towards the west in Europe. Twice these little hopping rodents have spread westward, to newer lands; once around 150,000 years ago to have vanished a few thousand years later, only to return again around 30,000 years ago. The colder climate helped with their success through Eastern Europe, as this little furry beast likes to hop around in the steppe like deserts, coming out at night time to feed.

Fossils of this small beast have been discovered as far west from Russian towards the Rhine in Germany. Great Jerboas were living happily in Europe! While many of the larger familiar beasts were migrating across the steppes, the little Jerboa  would have been hiding in its burrows, feeling the earth shake from the herds of the giants above. As yet, there is no evidence that humans interacted with them, but no doubt odd little hopping fur balls could have been spotted in the moon light.

Fossil leg bones of a Great Jerboa from Germany. On display at Staatliches Museum fur Naturkunde Stutgart. (Image from here)

So far no Great Jerboa specimens have been discovered in sites in France or Britain. But this does not mean that they didn’t hop their way across western Europe or across the Channel (which was more like a small river back then). Many museums holding Pleistocene collections do have lots of small mammal teeth and bones. Frogs and bird bones are pretty easy to spot. Teeth and jaws of shrews and voles have their own tell-tale signs and can be picked out easily. Bags and boxes of these bones are often left in museum store rooms, untouched; it takes time to go through and identify them. Hidden away inside there may be just be a bone, or even a tooth, of a Great Jerboa waiting to be discovered which could rewrite the textbooks of their awesome twilight distribution.

There was not a lot of information around on the Pleistocene Great Jerboa. Get in touch if you know more!! twilightbeasts[at]gmail[dot]com