Posted on October 2, 2017 by twilightbeasts

No other animal symbolises climate change like the polar bear does. Just like the dodo has become the standard animal representing extinction, the polar bear has become recognised as the animal signifying our impact on the planet’s rapidly warming climate.

TV programmes, newspapers and magazines all use an image of a polar bear when talking about climate change. There is the classic image of a lone polar bear standing on all fours on a small piece of ice, in the vastness of empty water. The fur is wet, and clearly this large creature is being portrayed as being very cold. Its thick padded, webbed feet, grip onto the freezing ice. The great white bear is looking out longingly to sea, searching for that next piece of ice it can swim to, hoping that there is a tasty seal just lying there waiting.

It is an extremely powerful image. A great creature, losing its home because of our selfishness. It is a stark reminder of the enormous effect we can have on our home; the home of millions of different species, each unique, and each just as beautiful as the next. 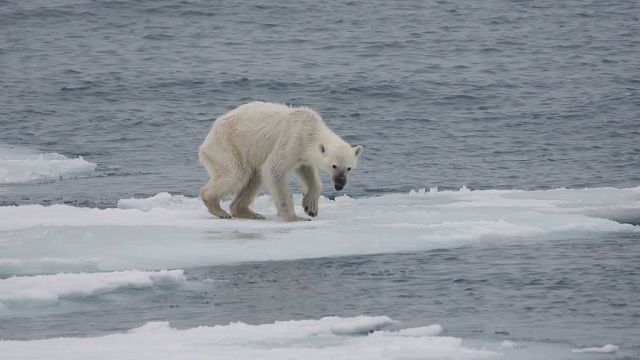 Polar bears belong to a rather remarkable genus in the bear family, Ursus. Species from this group have conquered the northern hemisphere: the brown bear (Ursus arctos) living in North America and Eurasia; the widely distributed American black bear (Ursus americanus); the tree loving Asian black bear (Ursus thibetanus); and the one that made its home with the sea and ice, the polar bear (Ursus maritimus). For just one genus, this is hugely successful: species are found all over North America, and Asia, and even the northern cold ice sheets. In the past there have been over a dozen different types of bear placed in this genus, including the giant Cave Bear.

Out of the four living species, the polar bear is the largest. And perhaps the most bizarre. 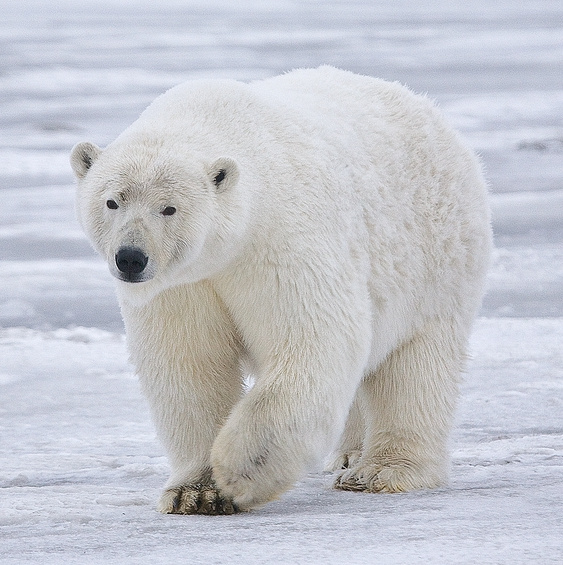 Polar bears are bears. Bears that hibernate, like other bears. But polar bears dig a den deep underneath the snow, and hibernate inside a snow-den! Their thick hair and layers of fat allow this giant to survive the freezing temperatures. Unlike other bears, the polar bear can swim for a very long time: up to a week non-stop. Their huge padded feet help spread the weight when walking on the ice, and it also helps in swimming. This bear also hunts seals: yes, the polar bear decides to spent a lot of time hunting an animal that is superbly adapted to life in the water. (Polar bears do not solely rely on seals for food. They will eat other animals, including washed up whale carcasses, as recently seen on Wrangel Island.)

Surprisingly, these are a very recent species to appear. Evolving from a population of brown bears, the oldest polar bear fossil so far found is only around 110,000 years old on the Norwegian archipelago, Svalbard. With much of the Arctic Ocean frozen over during the Late Pleistocene, some brown bears slowly took advantage of this dramatic change in environment. The heritage with brown bears is important, because the two species still can produce hybrids. Locked within the genomes of polar bears is a genetic marker that shows all living polar bears alive today are descended from a brown bear –  likely due to polar bear and brown bear mating in the recent past. Researchers had assumed this had been fairly recently, somewhere in Alaska where the two species can overlap. Recent work by geneticist Beth Shapiro and colleagues looked at DNA from brown bears in Ireland. They showed that all polar bears alive today are descended from one Irish female brown bear (and a male polar bear).

Polar bears in Britain and Ireland? It sounds crazy today, but during the Late Pleistocene the world was a drastically different place. The last major glaciation was between 110,000 to 11,700 years ago. (Remember, the ‘ice age’ was not just one long cold stage, but a plethora of cold times, known as glacials, and warm times known as intergalcials.) During this cold time, ice covered much of the Northern Hemisphere, which provided the conditions for brown bears to take advantage of, and we see the first polar bears around this time. With so much ice around, the sea levels were much lower, so animals could move much more freely. Britain itself was at some points covered by glaciers up to two miles thick, as far south as the Thames. This would have been the perfect environment for polar bears. And it seems that around 50,000 years ago one male polar bear met a female polar bear, and their descendants are what we see today.

Monster mysteries are popular all around the world. The legends of Bigfoot, sasquatch, and the Yeti, may all be answered by bear DNA. Samples of hair which have been claimed to belong to these cryptozoological beasts, were taken from across Northern America and the Himalayas and their DNA was analysed. The results showed the hair was actually from a huge variety of real animals, including horses, dogs, cows, and an odd result which we shouldn’t try to think about too much, a human. Some of the results showed that the ‘Bigfoot’ or ‘Yeti’ actually came from Himalayan brown bears. Sadly, the myths of a giant, hairy, bipedal creature is just that: a myth.

This symbolic species owes it’s existence to the incredibly dramatic climate of the last major glaciations. The last 100,000 years or so has not been easy sailing for these animals. The temperature has fluctuated, with the ice sheets waxing and waning which has had an effect on polar bear populations. Today is a different story. Different because of a factor no animals can prepare for: humans. We are having an effect on the whole planet in a way no other species has since maybe stromatolites changed the atmosphere to be more oxygen rich some 2 billion years ago.

There is a reason why polar bears are the symbol for climate change. They have had to cope with temperature changes in the past as their environment shrunk. The difference today is that it is happening fast, faster than natural. Because of our actions, species are unable to respond fast enough to the changes at not just a local level, but at a global level. The polar bear is the poster species for climate change, but there are millions others that are in danger of being lost forever. Climate change is real. It is happening. We al have a responsibility to do what we can.

17 Responses to Walking on thin ice