Posted on November 25, 2016 by twilightbeasts

Giant Sloths and Sabertooth Cats: Extinct Mammals and the Archaeology of the Ice Age Great Basin By Donald K Grayson

If there is one thing I enjoy doing in my downtime, it’s reading about Pleistocene megafauna. As well as having been my job, it’s also my hobby. No surprise I’ve been lucky enough to accumulate a nice stack of books on the subject. They’ve been useful for work, and also to break open when I need something good to read. My latest purchase is “Giant Sloths and Sabertooth Cats” (hereafter GS&SC) by DK Grayson, a name that should be familiar to anyone who follows the literature of the Pleistocene, and in particular the discussion of overkill. It was with great anticipation that I first cracked open the covers of this latest book. And I was not disappointed! 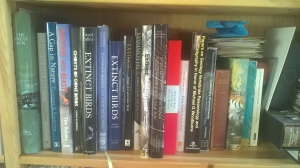 GS&SC is that rare thing- a very academic book that is also by turns funny, forthright, interesting, and human. The author gives a lot of himself to his writing and comes through as a very likeable narrator. Dry humour abounds.

The book starts with a classic case that should be well-known to fans of the Pleistocene: the Nevada State Prison footprints. This acts as a great lede for the book as it brings in many of the themes that run throughout – dating of humans in the Americas, the weirdness of ground sloths, the variety of Pleistocene fauna. There are even some great vignettes of the level of feuding between 19th century palaeontologists (including the famed O.C.Marsh) and how preconceived notions can often lead researchers agley.

There are chapters on the flora and fauna of the great basin to set the scene. The great basin is an area centred on Nevada but bleeding into Utah, Oregon, Idaho, and California depending on who you ask to define it. The great basin is a predominantly dry ecoregion surrounded by high mountain ranges that make up its flanks, and with a variety of topographical features from desert to mountain within. It is a very varied habitat home to some iconic plant species including Joshua tree (Yucca brevifolia), creosote bush (Larrea tridentata), and bristlecone pine (Pinus longaeva, one of the longest living trees on the planet, with some ancient individuals stretching halfway back to the Pleistocene). Of course the Pleistocene fauna is incredible. The bestiary chapter in the book is one of the best and most up-to-date I’ve read. Because its difficult to appreciate the Pleistocene fauna of North America, suffused as it is with sloths, glyptodonts, and other xenarthra, without reference to its Southern neighbour, Grayson has included a great section on the South American megafauna as well. The North American megafauna is treated comprehensively with sections on important species that includes distribution maps, evolutionary history, important fossil sites, charming reconstructions (by Wally Woolfenden) and the occasional photo of fossils or animals. The text accompanying the species descriptions is great and includes latest findings from ancient DNA, radiocarbon dating, stable isotopes, proteomics and other cutting edge stuff that has been filtered from the literature. As such it is a very timely and necessary update of the classic bestiaries from Kurten & Anderson’s “Pleistocene Mammals of North America” and Martin & Klein’s “Quaternary Extinctions”.

There are some great in-depth discussions included in the species biographies. For example, the incredible Manis mastodon find is brought up and both its dating and genetic implications covered. The Manis mastodon has a rib which incredibly also has a bone projectile (also made from mastodon bone) sticking into it, which must have been thrust in from above. Here Grayson lets slip his (perfectly respectable) bias with some special pleading that the Manis mastodon projectile could have been created by bone flaking due to intraspecific combat between mastodons in musth, rather than hunting by humans.

This bias against human explanations for the Pleistocene extinction appears as an undercurrent throughout some very useful chapters collating radiocarbon dates for megafaunal fossils, association (or lack of it) with contemporaneous humans and histories of important fossil sites in the great basin and the people who excavated them. These details are all fascinating and expertly explained, and include several TrowelBlazers (Bertha Pallan, Hildegarde Howard). In the final chapters the author lays bare his own thesis on what caused the megafaunal collapse in the great basin and all over the new world. Firstly though, he discusses the history of Clovis points (those wonderful and terrible sculptures of flint, that can take down elephants, and did take down mammoths and mastodons). There are sidetracks down issues of hyperdisease (interesting but difficult to find in the fossil record), the Younger Dryas comet impact (nonsense beloved of uber-cranks). Grayson has long been a proponent of a climatic explanation for the extinction of the megafauna. Here, he suggests that a species specific response to glacier loss and climate change best explains the staggered (over a couple thousand years) loss of the megafauna in the Americas. He argues that the relative lack of kill sites, the staggered nature of the extinctions, and the appearance of pre-Clovis humans in the Americas discount overkill as an explanation. I am obviously in the opposite camp and think that climate had little, or at most secondary effect in the extinctions.

What is interesting to me is that Grayson spends a lot of time in chapter 4 discussing how we can be misled by last appearance dates for species based on radiocarbon dates because we are unlikely to chance upon the last individuals of a species in the fossil record if they were common (like horse) and even less likely if they are rare (like Homotherium). When discussing the relative paucity and variety of kill sites, the same arguments must apply and I don’t think this is a strong argument against human responsibility because obviously we don’t expect there to be many of these sites (simply due to taphonomy) and the small window of overlap between megafauna and humans. Even given this, we are still left, in my opinion, with a clear signal of the immensely destructive and wasteful nature of human hunting in the audacious remains of Clovis points themselves. The thousands of points we have discovered were obviously crafted for one reason and one reason only. And it aint for hunting rabbits. These Kalashnikovs of the Palaeolithic speak more eloquently than a dozen butchery sites.

Now that we know that there were pre-Clovis cultures, does this impact on the likelihood of overkill? I don’t think so. All it suggests to me is that the culture evolved to meet different needs. Megafauna that have not encountered humans before are generally naïve (like Steller’s sea cow, or Galapagos tortoises) so the first immigrants into North America probably had no need for a specialised toolkit to hunt giant sloths or glyptodonts or mastodons that they could simply walk straight up to and butcher with a pointed bone stick right where they stood. Later, either as numbers diminished or naivety was eroded, the Clovis point could have given hunters the edge.

More thought must be given to the criticism that the staggered nature of the extinctions and the disproportionate loss of large mammals does not fit with human overkill. I think we can apply Grayson’s own arguments about radiocarbon dates and final appearances to the question of a staggered extinction. As more data comes in we are likely to find a less staggered sequence. Of course not all species went extinct at the exact same moment. The unique nature of each lost species means that it would have dealt with hunting pressure in different ways. But, geologically speaking, whether the extinctions happened over a couple hundred or several thousand years, the event would count as instantaneous to any observer from the far future. I even think overkill can provide a prediction that other explanations couldn’t in this scenario. If the extinctions are truly staggered (and we would need many more C14 dates to assess this) then it should likely follow a clear pattern, with the larger species succumbing before the (relatively) smaller species. If we were to find a pattern where common smaller species were going extinct before common larger species then that would argue against hunting as a cause. Or alternatively if we find last appearance dates (after sufficient sampling) that predate even pre-Clovis cultures then we can exclude humans as the causal factor. I don’t think we are going to find this.

Throughout the book Grayson does malign the overkill arguments as circular reasoning and in particular takes some pretty serious digs at Paul Martin’s abilities as a scientist (despite also praising his influence and providing some lovely compliments on his study of coevolution of fruits and megafauna). Martin was wrong in many of the things he said and wrote but a few of the comments do come across as petty given how much he did get right.

Overall, GS&SC is a must-have for any serious student of the Pleistocene. I disagree with Grayson on many of his conclusions but there is absolutely no doubting the depth and breadth of scholarship on display between the pages and he pulls off the incredibly difficult trick of making the text funny and warm. The book makes me think that the author would be an excellent person to share a couple of pints with in the pub while discussing our mutual love of Pleistocene mammals in a passionate but respectful manner. And if that isn’t a compliment I don’t know what is.

Small mistakes- Im only really qualified to pick up on the details of the carnivores but I noticed that the map of Homotherium finds omits the Tyson Spring Cave, MN find that was recently sampled for ancient DNA. There is also some confusion (table 4.4 in the book) about the difference between North American Panthera spelaea and Panthera atrox- a distinction which is well explained earlier in the book. Basically, the kind of tiny errors that are bound to be found in a massive undertaking like this book.