Amidst the footsteps of giants: What beetles can tell us about the past

Picture this scene: thousands of years ago in Britain during the Pleistocene Epoch, when giants roamed the landscape. Herds of woolly mammoth, bison and reindeer grazed the steppes during cold periods, watched closely by skulking hyenas and prides of enormous cave lions. During warmer, interglacial periods, giant deer and straight-tusked elephants strode amid lush vegetation, and hippopotamuses wallowed in languid rivers. You may have even glimpsed a few long-distant relatives of our own, making their way in the wild.

But what about the small creatures? These incredible environments were not just populated by giant beasts. Like today, the land was crawling with insects and other invertebrates. I am interested in one group in particular: beetles. They were everywhere. Amidst the footsteps of the Pleistocene giants, scurrying amongst the grass and the leaf litter, flying through the air, and swimming in the ponds and streams. They are as fascinating as any of the great woolly behemoths, which is why I spend a great deal of time carefully sieving ancient mud to find tiny fragments of old, dead beetles.

This slightly peculiar field of science, called palaeoentomology (the study of fossil insects) has its roots in the late 19th century. A number of people on both sides of the Atlantic, were beginning to investigate Pleistocene faunas, including a few who began to study the fossil insects. However, these early workers set about cataloguing their miniature finds with a mistaken notion: they assumed that the insect fossils they encountered must belong to extinct species. Thus, they began to describe and assign new names to their specimens. The work of American palaeontologist and entomologist, Samuel H. Scudder (1837-1911), pays heed to the frustration that evidently accompanied these early ventures, using such suggestive names as Pterostichus destitutus, Platynus dissipatus and, Bembidion damnosum (the species name meaning deprived, broken and damaged!).

However, this was challenged in the mid-20th century by Carl H. Lindroth (1905-1979) and Russell Coope (1930-2011), who realised that the vast majority of Pleistocene beetle fossils could, with great patience, be matched to modern species. For Coope, this began a career which was instrumental in the development of the modern discipline, and his significance to the field cannot be overstated. In particular, he pioneered the use of fossil beetles as a tool for understanding past climates and, on this basis, was the first to suggest the occurrence of abrupt climate changes at the end of the last glaciation. Today, most Quaternary beetle specialists can trace a direct academic lineage to him (he was the supervisor of my supervisor’s supervisor: my great-grand supervisor). There are some fascinating, often amusing, snippets of conversations with Coope, which you can listen to here.

You may well ask, why are these bits of old beetles so useful for understanding past climates and ecology? How do they tell us about ancient environments? The answer is that beetles possess a very particular set of attributes, which make them perfect for this purpose.

First and foremost, given the right set of conditions, pieces of beetles can preserve exceptionally well. Heads, wings cases and other body parts are extremely resilient, and have characteristics which can be identified by comparing to modern beetle collections today.  (Some, like in the example below, even retain a metallic lustre!) We can work out what species these fragments belonged to, just as a vertebrate specialist can identify species from individual bones.

A fossil clypeus (head plate), 1mm long and over 600,000 years old, of Helophorus strigifrons (above), and a complete modern specimen of H. strigifrons from the collections at Plymouth City Museum and Art Gallery (Images by the author)

Secondly, beetles are extraordinarily diverse. There are more species of beetles than any other type of insect, with over 400,000 species formally described, accounting for over 20% of all known species of organism. (To put that in context, there are just over 4,500 different species of mammals!) They are correspondingly diverse in their ecological habits, occupying almost every conceivable terrestrial and freshwater environment on Earth, often with very particular habitat requirements and preferences. The presence of different species in an ancient deposit can be used to reconstruct past habitats in surprising detail. 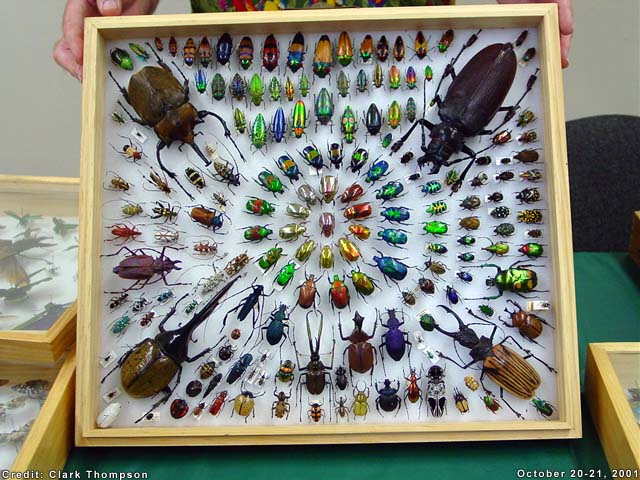 Finally, like most insects, beetles are ectotherms (‘cold-blooded’). This means that their physiological, developmental and behavioural functions are all dependent on external temperature. Where they are able to live, and how successfully they are able to feed and reproduce is tightly controlled by local climatic conditions. Many species have a specific range of climatic conditions in which they will live, which we call their ‘climatic range’ or ‘envelope’. And for those of us interested in past climates, this is very useful.

By combining the ‘climatic ranges’ of different species found together as fossils, the overlap between these ranges (think of it like a climatic Venn diagram) provides a very accurate estimate of climatic conditions in the past. This is called the ‘mutual climatic range’ method, or MCR for short.

How the mutual climatic range (MCR) method of reconstructing past climates works. (Image by the author, after Elias 2010)

When we study the full array of beetles from an ancient deposit, we can build a remarkably complete picture of the local environment, accounting for both ecology and climate. Beetles have been, and continue to be, used to great effect in this way! They tell us how cold it was during glacial periods (when species now found only in Siberia and Tibet lived in Britain!), and how warm it was during interglacials. They help us to understand ancient forests, how they developed and the extent of human influence. When extracted from archaeological sites, these insects can even tell us about the day-to-day lives of our ancestors.

As part of my PhD research, I am investigating the ecology of the West Runton Freshwater Bed, in Norfolk. This was deposited around 600,000 to 700,000 years ago in an ancient wetland, and is known for its impressive and diverse megafauna, including the famous West Runton Mammoth. By studying the beetles from this deposit, along with fossil pollen and fungal spores, I am developing a detailed picture of the local environment. This includes reconstructing the ancient climate and landscape, how these changed through time and the processes driving those changes.

It’s amazing what bits of old, dead beetles can tell us about the past!

This entry was posted in Uncategorized and tagged Francis Rowney. Bookmark the permalink.

5 Responses to Amidst the footsteps of giants: What beetles can tell us about the past