Monster movies were a huge inspiration for me when I was little. They fed my fascination with natural history: in particular the incredible work from the extraordinary mind of Ray Harryhausen. My favourite of his films was, of course, the amazing Clash of the Titans. (I’m talking about the original 1981 film with the wonderfully, unfaultable Harry Hamlin as our hero. The only Clash of the Titans film there is). And I think this is where my earliest true memory of a snake comes from: seeing the terrifying Medusa when I was around 6 or 7 years old. From this one Titan, began one youngsters fascination with legless serpents.

A somewhat chilling portrait of Medusa by Arnold Böcklin, around1878. (This is not from the Clash of the Titans film). (Image Public Domain)

Here we have an extremely successful group of animals. They have no legs, yet can effortlessly (and sometimes surprisingly quickly) move across the land. They use their forked tongue to ‘taste’ the chemicals in the air to help them hunt. Some have deadly venom to kill their lunch, while others will crush their prey to death before swallowing it whole. There are ‘flying snakes’ (which are actually pretty poor gliding snakes). There are even snakes that live in the sea. This is an incredibly diverse group of reptiles; with over 3,400 different species (mammals have around 5,400 different species).

The group have been around for a very long time, with the first fossils being found in rocks dating to around 100 million years old. Recent genetic studies push the origins of snakes back to somewhere around 128 million years ago. After the extinction of the non-avian dinosaurs, the number of snake species grew fast, and today there is a huge variety of venomous, non-venomous and colourful species found on every continent except Antarctica.

Some of the extinct snakes that have been discovered must have been amazing to see in life. Unfortunately the colours don’t preserve in the fossil record, but looking at modern species, there is no doubt that they were as vibrant. Some were pretty big too. Seriously big. The largest snake so far discovered, the 60 million year old Titanoboa, was longer than a double-decker bus (over 12m long). There were other giants too, including the enormous Gigantophis, which was over 10m long. And it is this giant that links us to our pretty large Twilight Beast. 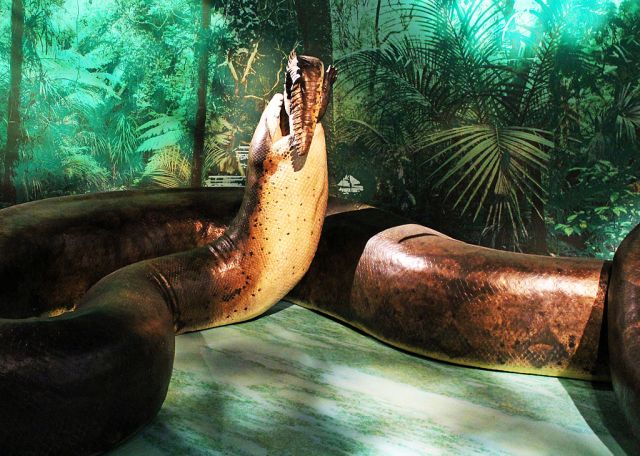 A Titanoboa swallowing what looks to be a crocodile. (Image from a display at the Smithsonian Museum. Image taken by Ryan Quick. Public Domain.)

Gigantophis was a 40 million year old giant, known from a few fossils. What we can work out is not only its size, but that this colossal creature belonged to an extinct family of snakes. Today there are around 20 families of snakes. This is a trimmed down group of vertebrates: there were many other families of snakes which are now extinct. (An exact number of extinct families has proven difficult to find.) One of these long lost families is the Madtsoiidae, which Gigantophis belongs. Small features in the skeleton identify fossils as belonging in this family, particularly certain projections present or missing on specific vertebra: clues to different families of creatures may be tiny, but they show how rich life’s diversity is.

Down under, one of the last species of this family may well have slid into aboriginal legend.

Farming in Australia led to the sad extinction of the beautiful Thylacine. Farming also inadvertently led to the discovery of one of the most fossil rich series of caves in the world. During the mid-1840s, in South Eastern Australia, sheep were vanishing. No blood. No remains. Nothing. The town of Naracoorte, sitting on top of the limestone coast, appeared to swallow sheep. Quite literally; the farmer discovered they had wandered into a cave. This cave, called Blanche Cave, was explored fully over a decade later with a small number of fossils discovered: but people were more interested in the impressive structures. 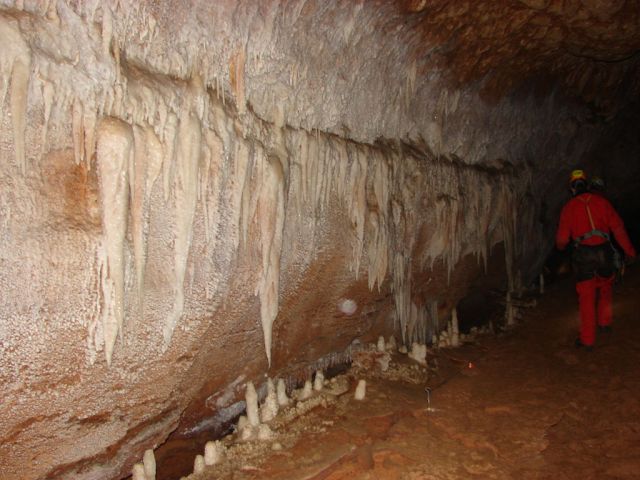 Other caves (26 in total) were discovered in the region soon after, and became visitor attractions. Some more fossils were found, but it was over a century later when the most spectacular discovery was made. And it was spectacular. In 1969, a caver and a researcher broke through to a sealed off chamber in Victoria Cave. Sealed for around 15,000 years, this cave was literally filled to the roof with sediment. And bones. This chamber was once a trap. A concealed hole in the roof, caught out unaware animals on the ground where they plummeted to their deaths inside the caves. Over around 280,000 years animals of all shapes and sizes fell inside the cave, along with pollen and plants. Slowly, the skeletons and sediment built up, like an enormous pyramid of death, eventually reaching the roof and sealing it forever. Well, until those two chaps opened it up again.

This is an extraordinary fossil rich site. Thousands of remains of creatures, from tiny frogs to giant marsupials. With such an abundance of fossils, this site is giving an unbelievably detailed view of the Late Pleistocene in Australia, and the incredibly weird creatures that once lived there. Enormous herbivores such as the massive wombat Diprotodon, and the funky looking kangaroo with a big ass fell to their deaths in this cave. Carnivores met their end here too: fossils of the largest lizard to have walked the Earth have been recovered, as well as the ferocious marsupial lion, Thylacoleo carnifex. There was also something that slithered it’s way into the cave. Only it never slithered out again.

And this is where we finally meet our beast: Wonambi naracoortensis.

Sometime around 5 million years ago, during the Early Pliocene, one species from a dwindling family of snakes grew big. Real big. At 6 meters long, this just a couple of metres off the longest python found today. But Wonambi was no python. It was one of the last species belonging to the family Madtsoiidae (Pythons belong to the snake family Pythonidae). Although not closely related to pythons, they shared a similar way of feeding; slowly suffocating its prey before swallowing it whole. However, this family had slightly different jaw structures to modern constrictors, so species in this family wouldn’t have been able to swallow massive prey. It would have unlikely tackled a giant Zygomaturus or one of the large kangaroo species. Small wallabies, and other smaller marsupials would have made an easy meal.

A wonderful reconstruction of the marsupial lion and Wonambi in a battle to the death. Display at the Naracoorte Fossil Centre, Australia. (Image Public Domain)

This giant reptile thrived until relatively recently. The climate in Australia throughout the Late Pleistocene didn’t fluctuate dramatically. There were some small changes correlating to events in the Northern Hemisphere, but generally it was warm with woodlands and rich grasslands. Around 60,000-50,000 years ago, the environment changed. It became drier, more arid. Woodlands and grasslands shrunk, along with populations of creatures. A stress that was too much for many. Remove an animal’s habitat and the animal cannot live: something so simple, yet many individuals of our own species seem unaware.

The extinction of Wonambi is a bit of a mystery. It fed on smaller marsupials, which were not as affected by large scale Late Pleistocene extinctions. The heat may have been a contributing factor, with the environment hotting up making it too hot for this more temperate species. There is no direct evidence of the extinction being related to humans (no cut marks on bones have been found). But this giant may well have slid it’s way into local folklore. The genus of this extinct giant, Wonambi pays homage to the local Aboriginal peoples serpent of the Dreamtime, where giant snakes formed the lands. It is very likely that the first peoples arriving in Australia sometime around 50,000 years ago encountered this giant.

In their own way, these stories have kept the beast alive. And perhaps, like Medusa did for me, the Womami has inspired some to look at the natural world around them.

Great PDF on the fossils found at the Naracoorte Caves: naracoorte-caves-animals-and-fossils-fact (2)

Flannery, T. (1994). ‘The Future EATERS: An Ecological History of the Australasian Lands and People’. [Book]