How do you weigh a Dodo?

Posted on February 3, 2016 by twilightbeasts

Extinction is something as real today as it has always been. What makes it even more real, and for our particularly emotional species, extremely sad is that these animals and plants are gone forever. We will never feel a dozen trilobite legs tickle us as they scurry over our bare feet while we paddle in the warm seas. The time when birds with teeth swooped between trees snapping up insects is long gone. Fortunately we only have to be afraid of seagulls stealing our fish and chips, not bipedal crocodile relatives or enormous pterosaurs. These, and countless other organisms, have been alive on our planet at some point in the past. In fact, it is estimated that 99.9% of all organisms that have every lived are no longer here: and only a tiny percentage of those have been preserved as fossils. Our planet has been, and still is, full of life.

A pretty big bipedal relative of crocodiles, Postosuchus kirkpatricki. A beautiful animal that lived over 200 million years ago. (Image by FunkMonk on Wiki)

Trilobites were pretty cool arthropods. Birds with teeth must have been wonderful to witness. Bipedal crocodiles, well, these were very likely to be terrifying. Sadly, people don’t shed a tear for these vanished creatures. We should because these were real animals that really lived on the planet: but they lived too long ago. We have a few fossils and, even more recently, some awesome palaeoart which help bring them back to life, but these are still mysterious animals that lived millions of years ago (and millions of years is a very long time!).

We can relate to more recently extinct creatures, including many of our Twilight Beasts. We can relate because humans were around when they were alive. Our ancestors saw powerful Woolly Rhinoceros making its way across the steppes. Humans heard the giant Cuban Owl in the forests. They even witnessed the majestic Glyptodons shuffle through swamps in their enormous shells. Our Twilight Beasts in particular pluck the heart strings because they sang the song of life so close to the present day. Close enough that we can almost still hear them.

One of these animals to only very recently vanish is perhaps the symbol of extinction: the magnificent dodo. Portrayed as ‘stupid’ creatures who willingly waddled towards their own deaths, their name, wrongly, has negative connotations. On dictionary.com type in dodo and you are presented with these definitions:

– Any of the several clumsy, flightless extinct birds of the genera Raphus and Pezophaps, related to pigeons but about the size of a turkey, formerly inhabiting the islands of Mauritius, Réunion, and Rodriguez.

– A person with old-fashioned, conservative, or outmoded ideas.

– A thing that is outmoded or obsolete.

I don’t think there could be a more derogatory description of any animal. Truth is, these were beautifully adapted animals for their island dwelling lives. They evolved to be pretty big and flightless, not because that’s a dumb thing to be, but because there were no natural predators. (More on the incredible dodos in our post the last squawk of the dodo.)

Despite a negative public view of these endearing birds, the mysteries of their lives still fascinate researchers (and funders). Ironically, new research published about dodos makes international press and members of the public are fascinated. Research has shown that although the dodo was eaten sometimes as a delicacy, the entire population wasn’t eaten to extinction: other animals that came to the island of Mauritius inadvertently killed them. Very recently there was some detailed research into their body mass.

We all visualise dodos are rather plump turkey like birds plodding along, like the painting above. However, some of the earliest illustrations of the dodo in life show quite a variety of sizes, with some pretty extremes.

Left to right: a pretty comical looking dodo, a one horned sheep and a red rail. By Pieter van den Broecke in 1617. (Image Public Domain) 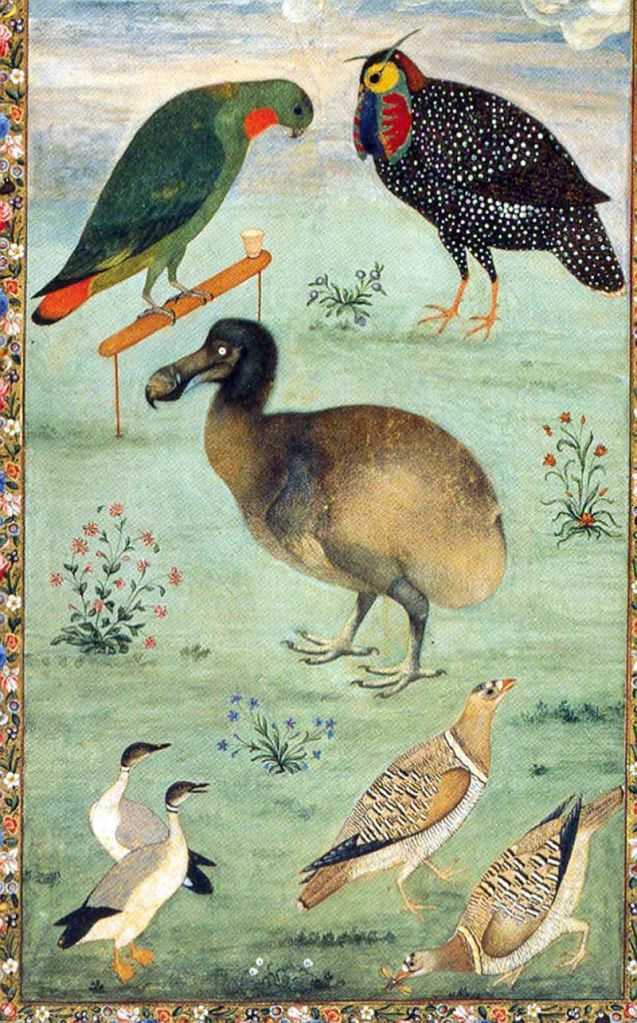 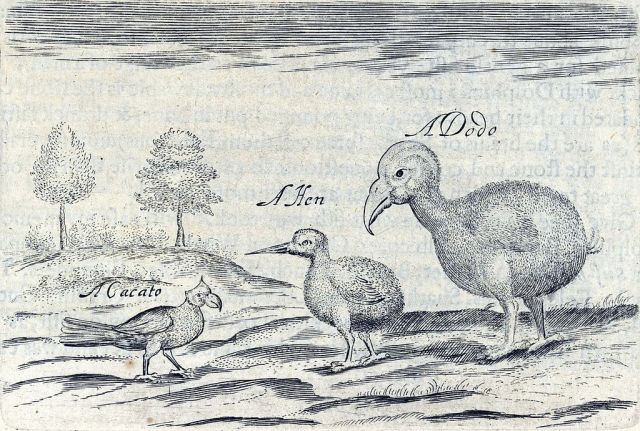 From left to right: a broad-tailed parrot, a red rail, and a dodo. Illustrated in 1634 by Sir Thomas Herbert. Notice how the Red Rail differs from the illustration in 1617. (Image Publc Domain)

Without cameras, sailors and artists sketched what they saw. And as you can see, this varied pretty dramatically. These illustrations from live animals show some slim birds and some much more well rounded ones. (This is more like to be a little artistic licence by the illustrator, although could represent male and females?) With such a large variety of depictions of the dodo, and written records of weight ranging from 22kg to 10kg, what was its true body mass?

The first question we should ask is why does it matter? Well, from the body mass of an animal it can give us clues and information about population sizes, metabolism, and the age of an animal. There have been attempts to calculate dodo body mass in the past. Using the equations calculating femur circumference to body size isn’t accurate because ground dwelling birds vary in their anatomy. Casts of the bones have been used to help mould muscles and tissue and work out weight, but this isn’t a very precise art. This new researched aimed to be more exact.

By calculating the ‘convex hull’ volume of the skeleton, it aimed to convert these volumes into body mass using examples from specimens where body mass is known. The convex hull is simply the points on the skeleton that can almost wrap around the skeleton: this is akin to wrapping cling film around the skeleton and a volume can be calculated. This method has been used on fossils to work out body mass estimations of creatures long ago vanished.

The convex hull on the skeletons. Points are plotted and these are joined together to give the convex hull volume. (Image is Figure 1 from Brassey et al. 2016)

Using 20 individual frozen birds from the same Columbiform family as the dodo, the group calculated the body mass of each. Using CT scanners, the skeletons of each of the 20 birds were digitised, and a programme calculated their convex hull. The relationship between the body mass and the convex hull volume was worked out. Three composite skeletons of dodos were scanned and their convex hull ration volume worked out.

With 20 precise measurements linking body mass to the CT scanned convex hull volumes, the researchers could calculate the dodo weight. The result was surprisingly light compared to what we imagine a dodo to look like: between 8kg and 10.8kg (that’s about the same weight as an adult fox). The three dodos used were skeletons made up from several individuals, so the results will not be exact. But what is really funky is the new technology used in this work: CT scanning, computer programs, and testing them out on extant species to test the working conversions work. It seems that as the dodo has been copied from earlier illustrations, their features have been accentuated a little, perhaps to reflect the ‘dumb’ character it was given.

It will be interesting to watch the future in this area, as it should answer even more questions about the life of the dodo. We know they only laid one egg, was this because too many would over populate Mauritius? How long between laying eggs? How long did they live for (a quick internet search returns results varying from 17 to 30 years old)?

Future work will be able to give us more of a glimpse into this truly enigmatic bird. You may think you know the dodo. Think again. The dodo, it would seem, still holds a few secrets.

Our post on the dodo provides a nice background introduction to this wonderful bird: The last squawk of the dodo.

6 Responses to How do you weigh a Dodo?