The moo of the wild

Posted on November 11, 2015 by twilightbeasts

In a sense, Pleistocene megafauna are still with us even in post-industrial England. It may not seem like it but the humble heifer is probably the most successful species of megafauna on the planet, outnumbering all the elephants, rhinos, whales, lions, tigers, and hippos put together! The simple cow (1.5 billion and counting), shaped by millennia of domestication into a (mostly) docile and manageable creature is a direct descendant of something so fearsome, and so deadly, that Julius Caesar (himself no slouch in the bellicosity department) described them as “a little below the elephant in size and of the appearance, colour, and shape of a bull. Their strength and speed are extraordinary. They spare neither man nor wild beast which they have espied.”

A beast that terrified the legendary Caesar must have been impressive indeed.

This is the aurochs (Bos taurus primigenius), the wild ancestor of our domestic cattle. 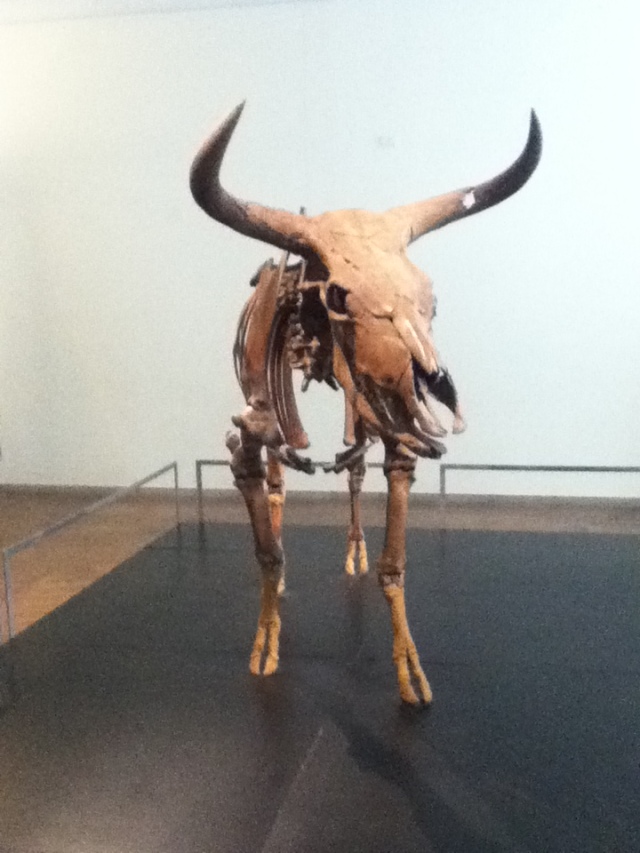 Danish Aurochs (Bos primigenius) in the National Museum of Denmark. Image author’s own.

We know a fair bit about the aurochs. Obviously it’s possible to extrapolate a lot from the modern cow, but there are other lines of evidence too. Aurochs are common in cave art, which show them as active, formidable creatures with sinuous forward-pointing horns and muscled bodies. Sexually dimorphic colour is suggested in these paintings with black bulls and reddy-brown cows. Fossil evidence has aurochs a component of Palaeolithic and later diets, with cutmarked bones found at many sites. Complete skeletons are known, with large males standing up to six feet tall and females only slightly smaller. Unlike the mammoth, woolly rhino, or Irish elk, the aurochs survived into the historical period and so we also have written accounts and woodcuts done by people who knew the living animal. Herodotus, the old testament, and Caesar, all talk about living aurochs. The Iron Age Gundestrup cauldron has a beautifully pictured scene with a dead aurochs surrounded by exhausted hunting dogs and a swordswoman. The very last wild aurochs lived in the Jaktorów forest in Poland before its death in 1627. These animals were kept in a royal hunting preserve (the conservation program of its day) where poaching was punishable by death.

It’s no surprise given the immense economic and cultural significance of the cow in the modern world that its extinct ancestor has been the subject of many ancient DNA studies. In fact (although I may be biased), some of the most interesting things we know about the aurochs come from genetic analysis of their remains. We’ve learned something about Neolithic husbandry practises from aurochs DNA.  They were first domesticated in the near east and imported into Europe, but once in Europe the early domesticated cattle were crossed with local bull aurochs (something similar was also done with domestic pigs). Essentially, once the domesticated animals were transported, the first farmers thought “we can do this at home for nothing”! We have mitochondrial genomes of aurochs, and recently the first nuclear genome was sequenced too (from a Derbyshire aurochs!). By comparing the aurochs genome to modern cow genomes we can see that artificial selection has had a major effect on genes responsible for growth and disease resistance: both of prime importance to the farmer.

One other region that shows signs of selection in the aurochs genome has to do with neurobiology. Possibly as a result of breeding for tameness and trying to pacify the wild species ferocious nature. It may be a truism that more people are killed each year by cows than sharks, but that hasn’t stopped people actually trying to recreate the savage aurochs. Perhaps the best known attempt was instigated by Herman Goering, via two zoologist brothers: Lutz and Heinz Heck. The story of the Heck cattle is fascinating and the parallels between a misguided project to recreate a mythical German Ur-cow, and the atrocities of the Nazi war machine when they applied this thinking to humans are all too obvious. The brothers took a range of modern cattle breeds (including Highland cows, Spanish bullfighting bulls) and bred them together to create something that bore a passable resemblance to an aurochs. They are still around today, where you can see them in zoos and wildlife parks. Me, I’d rather just hang out at the farm. 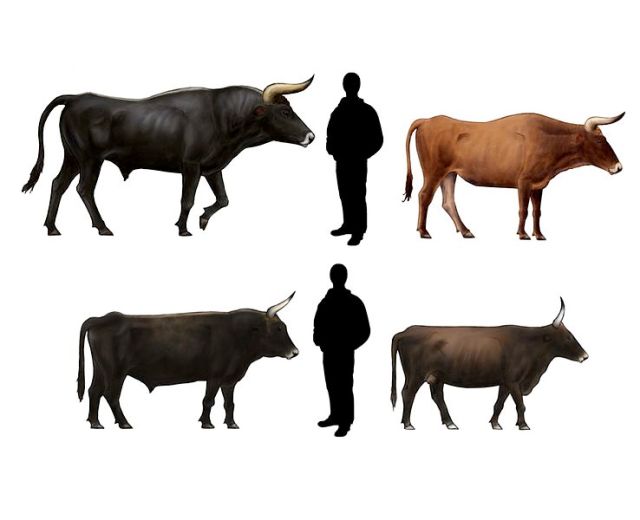 Comparison of life appearance of aurochs (top) and Heck cattle (below). Image by DFoidl via Wikimedia Commons

Gotherstrom, A., C. Anderung, L. Hellborg, R. Elburg, C. Smith, D. G. Bradley, and H. Ellegren. “Cattle Domestication in the near East Was Followed by Hybridization with Aurochs Bulls in Europe.” Proceedings of the Royal Society of London: Series B 272 (2005): 2345-50.[Full Text]

12 Responses to The moo of the wild