Posted on October 31, 2015 by twilightbeasts

Charles Darwin wrote 502 pages outlining his groundbreaking theory of evolution by natural selection. In it he provides incredible evidence of natural selection he gathered over 20 years, using many different species of animals, from humans breeding dogs to the wonderfully long tongues of moths. One species was conspicuously missing: Homo sapiens. Darwin gives just one tantalising line, writing:

“Light will be thrown on the origin of man and his history.”

[Clearly he meant ‘humans’ and ‘our’ history. I suspect the publisher’s deadlines were quite tough and this slipped passed Darwin.]

There was only one answer for the origin of humans in 1859: God, of course.

Darwin’s sentence may have been small, but it was incredibly powerful. Although it doesn’t specifically say, the theory of evolution by natural selection would not discount humans. There were similarities with the great apes and humans, but there were no hominin fossils then known. Although the first Neanderthal fossils were found in 1856, it would be another 8 years before it was recognised as a new species. In fairness, Darwin did boldly address the issue of the descent of humans in his 1871 book, The Descent of Man, and Selection in Relation to Sex. Here he suggests that humans evolved in Africa, where he writes:

“In each great region of the world the living mammals are closely related to the extinct species of the same region. It is, therefore, probably that Africa was formerly inhabited by extinct apes closely allied to the gorilla and chimpanzee; and as these two species are now man’s nearest allies, it is somewhat more probable that our early progenitors lived on the African continent than elsewhere.”

That Neanderthal fossil was just the beginning. Light would indeed be thrown. In fact, like the rays of dappled light through the canopy in an afternoon stroll through the woods, light would be scattered. Dozens of fossil finds over the next century would show how complicated human evolution was. Families, as we all know, are never simple: the hominin family is no exception. From the strange root munching ‘robust australopithecines’ to the enigmatic recent Homo naledi, our human family history was enormous with several cousins and second cousins. With a rich, varying environment, the African landscape allowed for a diverse range of specialist hominins to evolve. In the past there were a number of hominins living at the same time. Today we are the only upright ape left on the planet. 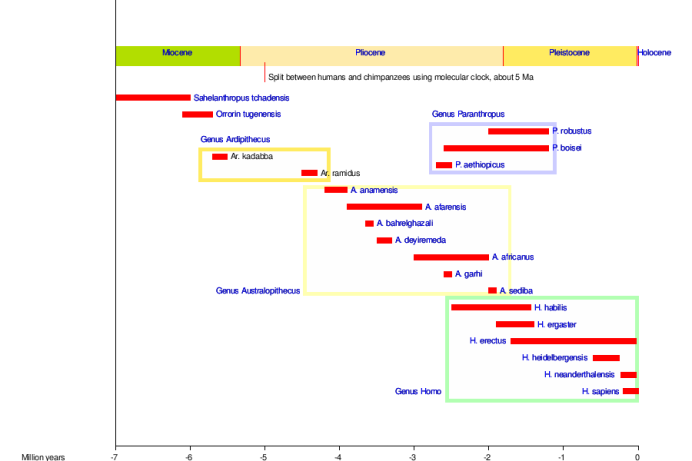 Meet the family. The many species of hominins and how long they were on the planet. Notice that several species were around at the same time. (Image Public Domain)

It was not a straight step by step evolution to Homo sapiens. It was a huge, bushy tree with many branches. Some species split off and died off without leaving any descendents, like the Neanderthals who split from our common ancestor around 500,000 years ago. Other species changed. We should say that just because a species became extinct and left no descents doesn’t mean that it was not successful – all the hominins we have discovered so far were perfect fro their particular niche.

What these incredible fossils have shown us is that the origins of our species was in Africa.

Next to the muddy, life giving waters of the Omo River in Southern Ethiopia, in the late 60s and early 70s, hominin bones were discovered in the sun cracked sediment. The skull fragments, legbones and numerous teeth were described as belonging to Homo sapiens. What makes these specimens so important is that they are the earliest remains of anatomically modern humans discovered so far. More fossil finds at the same layer in 2008 allowed them to be dated at around 200,000 years old. 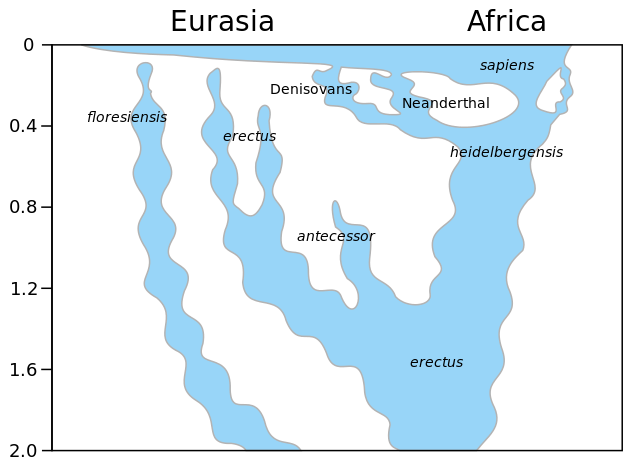 Not a simple road leading to the evolution of Homo sapiens.  One version of H. sapiens evolution based on fossil finds and distribrution. Note how H. sapiens blend with Neanderthals and the Denisovans. The story of us is not clear and simple. (Image Public Domain)

Our species seems to have been the one that spread furthest, not just across the land, but across water too. Pin pointing when and where groups travelled was never going to be easy. Based on some fossils finds, and more recently with additional work from genetics, the commonly held view is that Homo sapiens left Africa around 75,000 years ago, reaching Asia around 70,000-50,000 years ago, and a ‘small’ hop to Australia around 50,000 – 46,000 years ago. Simple, clean and easy. Surely we know by now that things are never this simple? Some fossil evidence shows there were attempts by some groups of Homo sapiens to leave Africa much earlier, around 125,000 years ago. It was thought that they either died out, or retreated back to Africa because there are not other fossils in Asia and Europe that are nowhere near as old. It is likely that there were several attempts at moving further into Asia by several independent groups, but left no trace.

An illustration of the migration of three human species. Only Homo sapiens travelled to Australia and the Americas. (Image Public Domain)

Theories are put forward based on all the available evidence. When new finds are made, the theories are changed accordingly. With rare open air sites preserving early H. sapiens fossils, palaeontologists turn the caves. Shielded from the outside world, and being crunched to nothing by scavengers, bones in caves have a stronger chance of fossilisation. This is one of the main reasons for the lack of Homo sapiens remains: preservation is rare and the area they lived in was pretty big. But fossils do turn up. And sometimes these completely change entire views altogether. And it does happen.

A new publication in Nature tips this conventional view of the migration of Homo sapiens on its head. In an extensive cave system in the Daoxian County, Southern China, palaeontologists have found one cave with some incredible finds. Within the layered sediment in the Fuyan Caves, 47 human teeth have been excavated. 47 teeth belonging to Homo sapiens. Detailed analysis of the size, cusp patterns and root shapes compared to other species of Homo from Africa Europe and Asia (Neanderthals, Homo erectus, and H. sapiens) show that these teeth belonged to H. sapiens. The authors showed they were not a locally evolved H. erectus population. This detail is important because of the age of the layer they were found in.

The site in Fuyan Cave have four layers: the bottom (oldest) layer was a silt with breccia; the third layer was a sandy gravel; the second layer contained the human teeth and mammal fossils; the top layer was a hard calcite flowstone. Using Uranium/Thorium dating, staligmite within the second layer was dated to between 120,000 – 80,000 years ago. This correlates to the Late Pleistocene mammals found in this layer, including the giant extinct Elephantidae, Stegodon orientalis, and an extinct hyena Crocuta ultima. This is a special site, because the excavation and stratigraphy has been recorded in such detail. We know exactly where each fossil came from. And we also know that the human teeth were not washed in from  a younger deposit, because the second layer is capped by a hard calcium flowstone: everything below that flowstone was deposited around the same time.

The Daoxian fossils show that Homo sapiens were in Asia much earlier than originally thought: at least 30,000 years earlier. There are still dozens of questions which need answering, and the discovery has several implications, as well as new possible areas to look for human remains. This may have been a population that survived from the first phase out of Africa 125,000 years ago; or they may have been a completely seperate exodus. The group may have died leaving no descendents; or they could have continued their travels, making new homes on the way, all the way to Australia.

The history of our species is not a straightforward walk across a continent. Some groups may well have travelled, but they may have stayed and other groups travelled past them to new areas through different routes. Fossils do not necessarily show a clear migration route. What is fascinating about our history is that the more evidence we discover, the more incredible the journey to where we are today becomes.

Postscript: Interestingly, in The Descent of Man, and Selection in Relation to Sex Darwin devotes just a few chapters to the origin of humans, but several more outlining his second theory of evolution by sexual selection. Fascinatingly we are looking at how sexual selection has worked on the evolution of our own species from big eyes to big lips. There has been a large amount of study into the human penis, which is larger (on average) for our size than other apes. Focus, however, may be beginning to be shifted from the penis and towards the ‘large vagina’ as anthropologist Holly Dunsworth discusses in her wonderful post ‘Why is the human vagina so big?’ Perhaps in the ‘large’ penis evolved in response to the large vagina: females controlling the selection?

Read about the incredible discovery of Homo naledi in our post written by one of the excavators: We are made of star stuff.

Read about the lost branch of Paranthropus in Side by side with Homo.

Darwin, C. (1859). ‘On the origin of species by means of natural selection, or the preservation of favoured races in the struggle for life.’ London: John Murray. [Full Book]