The beauty in the beasts

Nature is beautiful. Look around at the green leaves flashing brightly as the sun bounces off them. Look closer and you spot a flash of yellow as a goldfinch nips by. Shake a branch gently and you will be rewarded with dozen of mini-beasts dropping onto your hand: orb web spiders with their stunningly green oversized abdomens; dark brown leaf hoppers staying still hoping they are still camouflaged; dozens of flies a little dazzled by being disturbed as they circle slowly up of your hand; and a parasitic wasp or two, looking suspiciously like a little ant with little wings. At first there was just a tree. As you looked closer you unveiled a rich, vibrant ecosystem.

Our fascination and wonder with animals and plants around us is innate. Children can spend afternoons digging in gardens, watching worms wriggle or caterpillars crawl. For many adults, we may watch our children and smile remembering back to when we shared such a fascination a long time ago, in an age of innocence when we were allowed to watch the long spindly legs of a harvestman wobble with each step. And for all adults that inner child is still with us. Our wonder and curiosity at nature is still there given the opportunity. This is why natural history programmes are so popular. And this is why when I bring fossils out of the museum to talk to people there are as many surprised and excited faces from the parents as there are from the children. I love witnessing that inner child come out of so many people and they suddenly forget themselves and ask the most wonderful questions about the fossil they are holding. We all really do see the beauty within.

Humans have seen the beauty of animals for thousands of years. Nothing shows this more beautifully than the dazzling art that has been preserved inside caves. This art captures the souls of the magnificent beasts of the Pleistocene. Our ancestors saw the real beauty in the beasts. 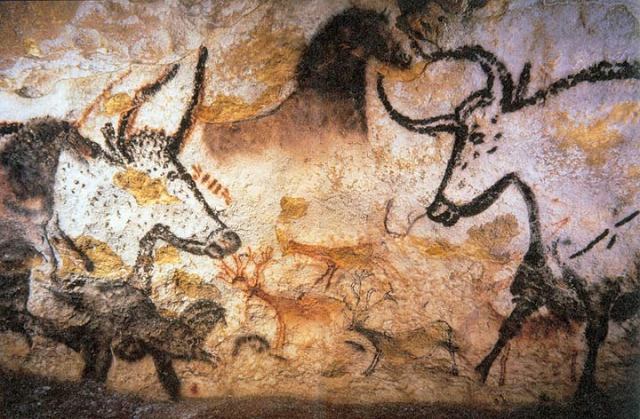 A beautifully busy painting on the cave walls at Lascaux, France. Here Aurochs, horse and deer dance in the darkness. (Image by Prof. Saxx. Public Domain)

From an ancient time when male woolly rhinoceros would clash to win the girl, and prides of lions ambushed giant deer, there are spectacularly preserved paintings on many cave walls. Paintings of the incredible creatures that hackled in the distance, or stomped across the Steppes. These animals have been captured with their movement, their posture, their life transported onto the cave walls. Several caves show some incredible scenes of many animals, such as that above from the Lascaux Caves in France dating to around 17,000 years ago. Around Lascaux are fossil remains of extinct mega-fauna, like the giant deer and bison but the cave paintings show us something else: the essence of these animals when they were alive. These artists observed the wild animals, watched how they moved, fed and fought and preserved this in their paintings.

Some cave art was more abstract, like the 40,000 year old red ochre handprint stencils at the caves at Maros, Indonesia, or the 40,000 year old hand stencils at the Cave of El Castillo, Spain. From around 35,000 years numerous cave art depict the local animals. Not the mini-beasts that lay hidden, but the big beasts that would have been a part of the daily lives of the people. Deep inside Chauvet Cave, in Southern France, aided by the flicker of a fire, many artists came and left their own interpretations of the animals they saw. Here lions, bears and hyenas are painted along with the giant mammoths, horses and bison. Cave walls would be cleaned and smoothed down before any animal was painted. As in most of the other caves, there are no illustrations of humans: perhaps capturing the spirit of a friend or relative was a little too much.

One of my favorite cave paintings from the walls at Chauvet Cave, France, dating to around 30,000 years ago. The typical posture of the hyena is captured beautifully. Below appears to be a leopard, which were common in Pleistocene Europe. (Image by Carla Hufstedler. Public Domain)

Painting may go back over 100,000 years (or even further) as scraps of ochre found on sea shells in a cave in South Africa indicate. Whether this ochre was used for body decoration or for painting pictures is not known. What is incredible is that so many cave paintings are preserved on the walls from so long ago. Some of the most spectacular are in France and Spain: Cave of Altamira, and the Cave of La Pasiega, both in Spain date to around 35,000 years ago. The French caves, Grotte de Cussac, Pech Merle cave, and Font-de-Gaume, are from around 25,000 years ago. La Marche cave, in France, depicts cave lions without manes, bears slouched over, and other animals from 15,,000 years ago. There are more recent ones dating to around 11,000- 10,000 years ago: Les Combarelles and the Cave of Niaux, both in France. Here, the writing is on the wall. A lack of fossils does not show that these animals were absent: we know they were there because of the beautiful illustrates.

Ancient cave art of Twilight Beasts is not restricted to just Europe. There are several sites across the world. The Khoit Tsenkher Cave in Mongolia is home to wonderful illustrations of many animals, including ostriches, elephants, bison, deer, lions and others, with many images overlapping. In Australia, Africa, and India, there are numerous caves that act as photo albums of the past.

What is fascinating about these sites with cave art is that they were not living spaces. There is no evidence of humans setting camp in these chambers, and many of them are not easy to access. These were special places. Some researchers suggest they were used to call the spirit of the animals by the group’s shaman. We will never know. What we do know is that the artists were inspired by the incredible animals that they shared the land with.

Today, we are often so busy with our lives that we rarely get a chance to stop and really look. When we do, we are amazed at the real beauty of nature. The next time you walk past a tree, take a moment to look at that tree. 35,000 years ago some people really looked at the animals around them with curiosity and they wanted to capture the majestic creatures. They saw the true beauty in the beasts.

Lewis-Williams, D, (2004). The Mind in the Cave: Consciousness and the Origins of Art. Thames and Hudson. [Book]

Pettitt, P, (2008), ‘Art and the Middle-to-Upper Paleolithic transition in Europe: Comments on the archaeological arguments for an early Upper Paleolithic antiquity of the Grotte Chauvet art’, Journal of Human Evolution 55 (5): 908–917. [Abstract only]

9 Responses to The beauty in the beasts