Born in the USA

Posted on July 4, 2015 by twilightbeasts

Think of the 4th of July festival in the United States and you automatically think of all the things associated with that country. Fireworks and flags, Elvis, rock and roll, cowboys and vast expanses of prairie perfect for galloping (ok, maybe that’s just me!), and above all, the magnificent, haughty, beautiful American Bald Eagle (Haliaeetus leucephalus). These are truly beautiful birds; on one occasion I was allowed to hold a very pleasant and surprisingly snuggly one on my wrist. I was surprised at the size, power and muscle of this creature, even though it displayed adorable traits of dorkiness, wanting treats and much bumping of human nose to aquiline beak. Apparently it’s a happy, snuggly eagle thing. 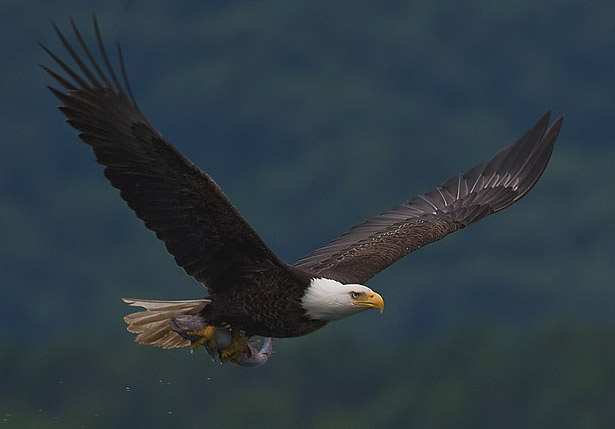 A magnificent Bald Eagle in flight. Here, it has grabbed a fish with it’s enormous talons. (Image by Yathin S Krishnappa Public Domain)

I wouldn’t ever have the heart to tell that beautiful bird there were once much, much larger birds of prey during the Pleistocene. Take the Woodward Eagle of the Americas (Amplibuteo woodwardi), for example, this was a giant that gave the Monster Birds a run for their money. It has been speculated it was the largest raptor of North America and the West Indies, although there have been recently discovered fossils which may suggest there were potentially even bigger birds!

The Woodward Eagle, perhaps should be thought of as the all American mega-eagle. These were enormous creatures by anyone’s standards. The length of the body alone was between 125 to 150cm: that’s almost as long as me! The wingspan was in excess of 3m, as, unlike its equally gargantuan woodland dwelling extinct New Zealand ‘cousin’ Harpagornis moorei, the Woodward Eagle required wide open, arid landscapes to hunt, perhaps in a similar manner to the extant condor.

Strictly speaking, Amplibuteo wasn’t really an eagle – it belonged to the Buteoninae subfamily, and is closer to the hawk or buzzard – true eagles of course share considerable similarities, but belong in the Aquila genus camp! Frankly, I wouldn’t have argued with these birds that they weren’t ‘real’ eagles, as they were quite capable of killing and munching down on larger mammals such as antelope and canids.

Named after Sir Arthur Smith Woodward, mostly remembered nowadays for being suckered by the Piltdown Man fraud, the first fossil finds of the bird date back to 1911. A. woodwardi must have inhabited substantial areas of North America during the Pleistocene as fossils have been found at the world-famous La Brea Tar Pits, California, right across to Florida. Not so long ago, a substantial assemblage of Amplibuteo bones were found in Cuba’s Cuevo de Sandoval region, near Havana. (Cuba does appear to have all the luck with their enviable fossil records.) This unique (to date) find shows that not only was Amplibuteo flying high in Florida, but had spread its wings to settle in the Caribbean. 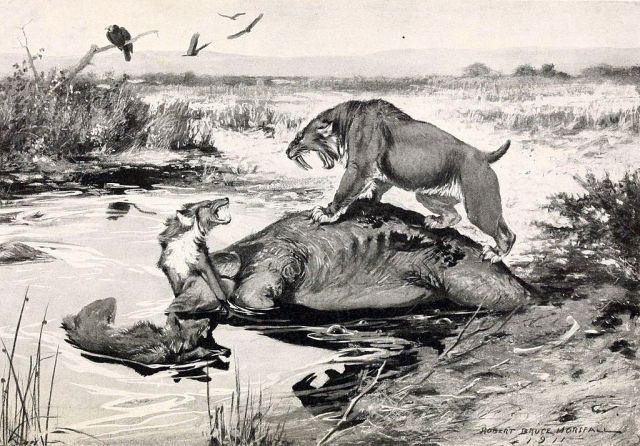 A classic illustration of La Brea Tar Pits, with the sabre tooth cat, Smilodon attempting to fend off two Dire Wolves. The posture of the large bird on the branch looks like it could be a Monster Bird. But are those hovering giants the Woodward Eagle? (Image by Robert Bruce Horsfall, 1911. Public Domain)

A. woodwardi was a niche predator in many ways; its gracile form and sheer size meant it likely relied on hovering over open spaces, riding invisible warm currents high in the sky. Relying on its sharp sight to see it’s prey, it would have needed scanty tree coverage to swoop down at astonishing speeds to claim its victims, or just to see a carcass ready for the taking. Researchers have acknowledged the relationship between the bird of prey and its palaeoenvironment hasn’t been fully explored yet (that noise you hear is me squeaking with excitement at the idea of the pollen records from Cuban swamps and caves – you know I love my pollen!). Even less is understood about the decline of this majestic bird in North American contexts.

What we do have, however, is some solid and fascinating research on the changing environment of late Pleistocene Cuba, as the island has a passionate love for exploring its heritage in all forms. We know that somewhere around 10,000 years ago, a series of extinctions occurred throughout the east coast of the United States and the West Indies. These climate oscillations between drought and deluge were rapid, taking their toll on the most environmentally-dependent species first. The demise of the Woodward eagle would not have been as clean cut as it would have been for say, wetland creatures in such circumstances. Amplibuteo was an apex predator, very much in its comfort-zone in savannah-type arid conditions. Its extinction is more likely to have resulted from a cluster of factors, with prehistoric humans arriving in the mid-Holocene from other places, seeking refuge from environmental and climate-related factors elsewhere – mass extinctions seldom occur because of one factor alone. 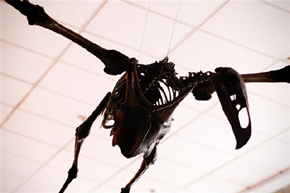 The first victims of this event were mammals such as monkeys and larger rodents. The balance of the fragile dance of death between hunter and hunted had been upset. Predators such as Amplibuteo would have targeted other food sources, but would also have found themselves in direct competition with humans. They may have been viewed as pests – here in Ireland, to our shame, some of the most beautiful rare harriers and sea eagles have been poisoned by ignorant people who do not understand the balance of nature these animals perform, and that their predation is a necessity in not-so-fluffy nature. Archaeological finds of lithic tools and associated debitage in the Cayo Flores and Langusto areas of the island have been shown to date to around 8000 years ago. This is loosely contemporary with what we know of the extinction of the Woodward Eagle. It is perfectly feasible to envisage these early human settlers exterminating what they saw as threats to their own welfare and lives.

Just like the contemporaneous Ornimegalonyx, the giant eagle-hawk (or sea-eagles), would have faded into the twilight of legend and memory, as landscapes, fauna and vegetation changed from direct human activity, and from unstoppable global climate events. Human activity played some part with these great birds of the Americas, as there seems to be a permanent issue with our own species learning to balance land-use with conservation. In these days of almost immediate communication, and social media, we are painfully, and often agonisingly aware of the pending extinction of wildlife on our planet today, I can’t help wondering if prehistoric humans also mourned the last sightings of Pleistocene megafauna, and was legend the only way they maintained the memory of what had once existed and inspired awe.

While the Bald Eagle may be the iconic symbol of the United States today, it is a petite reflection of Amplibuteo woodwardi, the giant hunter who once arched and swooped over ancient blue skies and golden prairies, ‘from sea to shining sea’.

11 Responses to Born in the USA