Side by side by Homo

Of the many and varied animals that lived alongside the earliest members of our own genus, Homo, few are as captivatingly enigmatic as the hominins that are grouped together as ‘robust australopithecines’, or placed in the genus Paranthropus. These are truly Twilight Beasts, in part because they went extinct in the Pleistocene as did so many fascinating critters, but also because research into Paranthropus has often been over-shadowed by investigations of their Australopithecus and early Homo contemporaries. It is almost as if palaeoanthropology decided that Paranthropus was definitely not a direct human ancestor and parked it on the academic back-burner. Lets bring these charming hominins waddling back into the limelight.

So what were they? Known from the African fossil record from about 2.5 million years to just over 1 million years ago, the (probably) three known Paranthropus species shared a number of distinctive characteristics (P. robustus, P. boisei and P. aethiopicus. They were small bipedal primates, probably capable of walking upright and with quite dextrous hands able to manipulate objects rather well.  At around 4 feet tall, standing next to a Paranthropus the head would probably reach my chest. From the neck down, this little hominin may have looked much like a small, rather short-legged and portly human.

Paranthropus boisei skull from Nairobi. Note the very large cheek bones, and ridge at the top of the skull. (Image by Bjørn Christian Tørrissen. From here)

Atop that body was a head with a low vault and brow-ridges reminiscent of today’s chimps, a rather flattened nose, and heavy, muscular jaws equipped with impressive teeth. Paranthropus showed what palaeoanthropologists call megadonty, the development of teeth that are very large in relation to body size. In fact, the incisors and canines were distinctly small: it was the premolars and molars that filled most of the mouth. Between them, the broad premolars and massive, flat-crowned molars, with exceptionally thick enamel, were a means of chewing abrasive plant material for hour after hour after hour…. And to drive those jaws, the masseter muscles were really big, as shown by broad, flat cheek-bones pushed round to the front of the face. That anterior position aligned the chewing muscles to have maximum efficiency over those big molars. From the neck up, Paranthropus was a highly-derived chewing device.

The impressive skull of ‘Nutcracker man’ (Paranthropus boisei) skull. This specimen has a slightly longer face than that of the skull above. Notice the huge molars giving this skull it’s nickname. (Image by Wiki member Durova. From here)

The first Paranthropus boisei fossil was discovered by the TrowelBlazer Mary Leakey in 1959. Louis and Mary named a new Genus Zinjanthropus boisei based on many differences between this skull and Austrlopithecus. It wasnt originally thought to be Paranthropus because it appeared more as an ancestor to Homo. Naming and classifying fossils (taxonomy) was a ricky business, especially when only fragments were found, or where there was such a small sample to compare it too. For some time ‘Dear Boy’ as it was affectionatly known as by Mary and Louis, was placed into the Genus Australopithecus. It was later moved over into the Paranthropus Genus, as more fossils were found, but kept the species name. The first specimen Mary found (the type specimen) was nicknamed ‘Nutcracker Man’ on account of it’s enormous molars.

It would be easy to get the wrong impression of this hominin. Their anatomy was all about eating low-quality plant material, so were they just a herbivorous side-branch of hominins, while the real business of evolution went on elsewhere? Enamel microwear and bone stable isotope studies confirm that Paranthropus ate more plants such as tough, drought-adapted grasses (known as ‘C4’ plants), than any of their contemporary hominins: such a diet would take most waking hours to ingest and process.

This wasn’t just a bipedal ape browsing shrubs and bushes. There is some evidence to suggest that Paranthropus used stone tools. Evidence from the Swartkrans, Drimolen and Sterkfontein sites in South Africa show that Paranthropus robustus used pieces of bone as digging tools, possibly to access tubers and tasty termites. In fact, there are no grounds for thinking that Paranthropus was less socially and behaviorally complex than any other Plio-Pleistocene hominin, including the various assemblages of unique fossils that constitute Homo habilis. The adaptation to eating tough plant material may just have been a broadening of Paranthropus’ dietary niche. Think of pigs: they have the teeth to cope with tough roots and nuts, but will eat all manner of foodstuffs if they are available, including pizza and footwear. 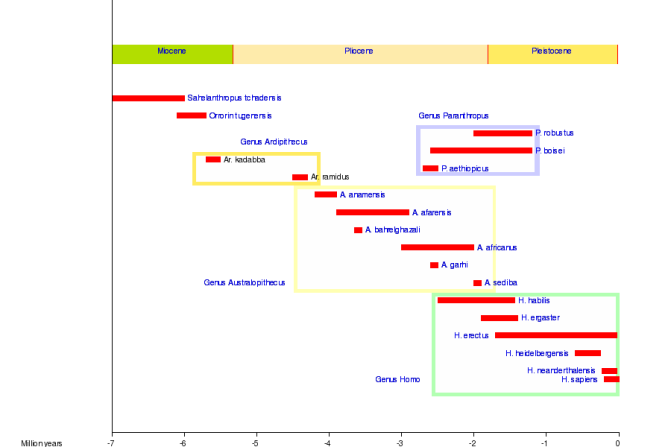 The several species of hominins through time. The Genus Paranthropus are seen as a seperate cousin to other hominin species. A species that vanished.  (Image from Wiki Commons)

When the first Paranthropus fossils were found at Swartkrans in 1938, Robert Broom, a magnificently eccentric medical practitioner and palaeontologist, named them Paranthropus meaning “Beside human”. It was a good choice of name. Eight decades later, with Paranthropus known from numerous sites in East and South Africa, it still appears as an animal ‘beside human’, a minor character with a walk-on part in the human story. It is fascinating to think that these little root chewing apes were on Earth at the same time as at least 6 other hominin species.

I think that is a shame that these hominins have been overlooked – they developed their own distinctively derived morphology and, presumably, behavior. These relatively unknown Genus were very sucessful: the species were around on the African savanah for around 1.5 million years. Paranthropus is much more interesting than just one of the crowd, looking on as early Homo emerged from the great Plio-Pleistocene australopith mish-mash, and deserves more attention in its own right.

7 Responses to Side by side by Homo