Down the rabbit hole

Posted on February 12, 2015 by twilightbeasts

“You’ve got no right to be growing here” said the Dormouse to Alice during her sojourn in Wonderland. “Don’t talk nonsense” Alice replied to the tiny, dozy rodent “You know you’re growing too”. To which the Dormouse retorted “Yes, but I grow at a reasonable rate, and not in that ridiculous fashion”.

That sassy dormouse who felt it was growing, just as it should, may very well have been Leithia melitensis, the Giant Maltese Dormouse who was about twice the size of its modern cousin. There were four prehistoric dormouse (Glirideae) species scattered across Sicily and the Maltese Islands; two of those are the ‘giants’ L. meletensis and the slightly smaller L. cartei. Here on Twilight Beasts we’ve featured truly giant megafauna – the massive and nightmarish short-faced bear, the lumbering Megatherium and the huge cuddly Diprotodon to name but a few. These rodents, however, were of unusual size in their class, but were still quite petite for the Pleistocene – with a cuddly, hamster-like body around 30cm long, most likely golden-tawny fur, huge bright black eyes, and delicate little paws and furry tails. I find it funny to think of these dinky dormice as prime and fine examples of what is referred to in palaeoecology and biology  as ‘insular gigantism’. 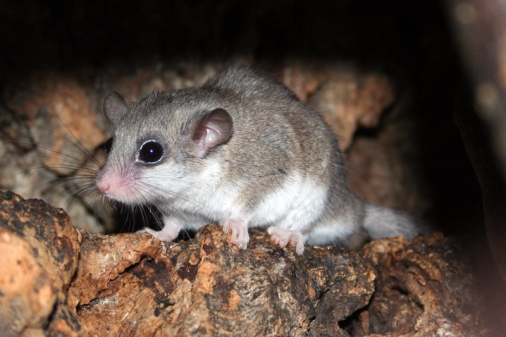 The very cute little African Dormouse (Graphiurus sp.). The Giant Dormouse would have looked very similar, except it was the size of a guinea pig. (Image by H. Osadnik, from here)

Island life is the biological equivalent of popping down that rabbit hole in Alice in Wonderland. Being separated from mainland environments often has a funny influence on both flora and fauna. Insular biogeography is a complex field of study in its own right, which takes into consideration the availability of resources, how isolated that island is, the duration of isolation, sea currents, temperatures and predators within an ecological system. Large animals, when isolated on islands, often shrink in size as a response to competition for limited natural resources. This is well illustrated by the mini-mammoths (Mammuthus creticus) of Crete and the half-pint Elephas mnaidriensis of Sicily and Malta. However, the smaller island creatures tend to grow in size (insular gigantism), perhaps because of less predator stress. It’s this phenomenon which likely accounts for the ‘giant’ Leithia dormice genus of the most southern Mediterranean islands.

The Giant Maltese Dormice were recorded first by the ubiquitous Scottish naturalist and geologist, Andrew Leith Adams, in 1863 when he found large amounts of their little bones in the sediments of the Maqhlaq Caves of Malta. He knew they were dormice, but what genus? He decided they belonged to the Myoxus genus (which includes the extant Edible Dormouse), although he knew something just wasn’t quite right. The taxonomy would be reassessed by Richard Lydekker in 1895. Lydekker named the new-found genus Leithia, after Andrew Leith Adam’s middle name!

A stern looking Richard Lydekker from around 1900. Lydekker named the new Genus of Giant Dormouse. (Image from Wikipedia Commons here)

Malta is special even by Mediterranean standards. For the environmental archaeologist, it’s pretty much got it all, with a unique cluster of upstanding archaeological remains, a mysterious Neolithic society, pretty fab geological features and a history of unusual prehistoric fauna, now sadly extinct. It’s likely that most of those creatures arrived on Malta and Sicily some 5.8 million years ago, taking advantage of the land corridors between Europe and North Africa which resulted from the Mediterranean drying up! The Mediterranean actually ‘dried’ about five times due to a peculiar set of environmental circumstances referred to as the Messinian Salinity Crisis. After the flooding of the Mediterranean (the Zanclean Event) about 5 million years ago, the islands were pretty much isolated from Europe and Africa.

However, the tectonics beneath the waters around Malta and Sicily are very active, and it is likely they thrust up some sort of land bridge to allow another wave of migrating animals sometime around 690,000 years ago. The Ice Age decreased the depth of the Mediterranean considerably, so the waters were also shallow enough to allow the most courageous animals to swim across.  The northern hemisphere was in the icy grip of glaciers, so while the Maltese islands may not have been experiencing bikini weather, it was better than the perishing cold that controlled Europe. The complex dance between sea transgressions and land upheaval meant that Malta entered into a period of insular isolation from this period of the Pleistocene, allowing the development of unique island species. This was again interrupted by another wave of creatures on the run from the ice, around 300,000 years ago. Some have theorised that sea level change, perhaps in combination with tectonic events, briefly reconnected Malta and Sicily with the southern parts of Italy. Certainly Leithia melitensis and L. cartei are found on Sicily, but have not yet been found on the Italian mainland. But who knows what future digs may produce?

Malta itself remained one big island rather than 2 large ones and 18 tiny’ns until the melt waters of the dying Ice Age flooded the Mediterranean, causing the creation of the island group we know today around 20kya – although that’s open to debate! The bone and sediment deposits in the caves of Gh’ar Dalam in Malta have provided some sort of indirect chronology for these pretty little rodents; ‘Layer V’ within that cavern contained hippopotamus teeth and bones, as well as bones of tiny ‘giant’ – and not so giant- dormice. That stratigraphy level has been tentatively dated to around 180,000 years ago, although there is likely to be a very large margin of error within this date. Maltese caves have had a lot of human habitation over thousands of years, and people tend to dig holes to hide rubbish in, inconsiderately messing stratigraphy up for future archaeologists and palaeo sorts! Digging or scraping holes in a sediment or soil allows organic material from more recent levels to drop into deeper, early levels, and this can contaminate radiocarbon dates pretty badly, giving serious inaccuracies. Radiocarbon dating is a tricky thing indeed!

The ‘boot’ of Italy and the ‘ball of Scicily in the Meditteranean Sea. To the South of Scicily, you can make out a small island. This is Malta. (Image by NASA. Public Domain, from here)

So, what made the graceful and enigmatic Giant Dormouse vanish from history? Did the story of Leithia end on Malta or Sicily first? And when exactly did the little beasties become extinct? We actually don’t yet know for sure. Climate has always been a bit of an issue on Malta. My MSc lecturer in Environmental Archaeology, Chris Hunt (now in Liverpool  University doing exciting things with Shanidar Cave and Bornean trees!), has considered the islands of Malta and Sicily to be key in understanding environmental changes after the Ice Age, being located between Africa and Europe. He states that Malta was regularly heavily forested in more clement weather conditions and barren during cold phases. Certainly long term pollen charts bear this out. But even scrub-land would have been sufficient to nourish a  small population of little dormice. Unfortunately, we probably need to look at the arrival of humans around 7000 years ago for the answer to the dormouse demise.

The arrival of humans to Malta during the Neolithic period resulted in massive vegetation clearances to accommodate lifestyles which were not as harmonious with nature as many people like to imagine. Cores taken at Burmarrad on the island show signs of ‘cut and burn’ clearance around 7300 (calibrated) BP, reducing the landscape to ground-hugging herbs such as Plantago lanceleota (Plantain) and Rumex (dock leaves). They are also the plants which indicate human agricultural activity. Modern dormice depend entirely on woodlands for diet and habitat. It is likely L. melitensis and L. cartei were exactly the same in their habits. We all know that dormice do like a little sleep in their forestry burrows, as they will hibernate in cold winter months. It would be doubtful that many would survive arboreal burning events caysed by Neolithic farmers creating open land for grazing and agriculture. We’ll learn even more about the ‘boom and bust’ aspect of grazing and settlement landscapes pretty soon, because of the  groundbreaking FRAGSUS project being carried out at the moment by teams from Cambridge, Malta and of course Queens University Belfast.

I’m going to stick my neck on the chopping block and speculate that the giant dormice of Malta and Sicily survived long enough into the Holocene because of a peculiarity in Roman cuisine – they rather enjoyed eating honeyed roast dormouse. Malta is known as the ‘honey’ island (hence the name Melite, or Μελίτη, meaning sweet as honey), and little mousie delicacies could easily have been introduced to mainland Italy via Sicily any time from the Early Bronze Age. The one thing I’ve learnt from archaeology is that when trade is involved, seas are no barrier – and honey is one heck of a preservative. Again, as we learn more about human diet habits and settlement development on Malta we can speculate with more confidence as to the why’s and when’s of the extinction of Leithia melitensis.

‘Of course, of course; just what I was going to remark myself.’

Gatt, P. (2007). ‘Controls on Plio-Quaternary foreland sedimentation in the Region of the Maltese Islands.’ Italian Journal of Geoscience. 126. 1. [Full article]

Magny, M., Miramont, C., & Sivan, O., (2002). ‘Assessment of the impact of climate and anthropogenic factors on Holocene Mediterranean vegetation in Europe on the basis of palaeohydrological records’. Palaeography, Palaeoclimatology, Palaeoecology 186. pp.47-59. [Abstract only]

Meijer, P and Krijgsman,W. (2005). ‘A quantitative analysis of the desiccation and re-filling of the Mediterranean during the Messinian Salinity Crisis’. Earth and Planetary Science Letters. 1-9

Micallef , A, et al. (2012). ‘The submerged paleolandscape of the Maltese Islands: Morphology, evolution and relation to Quaternary environmental change’ Marine Geology. [Abstract only]

8 Responses to Down the rabbit hole