A unicorn out of the twilight

Posted on October 29, 2014 by twilightbeasts

The family Rhinocerotidae evolved around 50 million years ago, with the earliest fossils found in North America. Closely related to tapirs and horses, belonging to the Perissodactyla, at least 26 different genera of rhinos have lived on the planet. Today, less than a handful survive.

Rhinos have been successful in a huge variety of different environments. The relatively unknown narrow nosed rhinoceros (Stephanorhinus hemitoechus) was plodding across Britain around 125,000 years ago when the climate was much warmer, and hippopotamus bathed in the warm rivers across the land. The huge, shaggy woolly rhinoceros (Coleodonta antiquitatis) was perfectly adapted to life on the cold Mammoth Steppe until around 14,000 years ago when the temperatures warmed and the Steppes vanished. Our Twilight Beast was an unusual rhinoceros that was at home on the open grassy plains.

The first fossil of our beast that was described came from a Princess’s cabinet of curiosity. TrowelBlazer Yekaterina Vorontsova-Dashkova, also known as Princess Dashkov, donated her ‘Cabinet of Natural History and other Rarities’ to the Natural History Museum at Moscow University in 1807. The director of the museum, a rather grand looking man, with a rather grand looking name, Johann Gotthelf Fischer von Waldheim, saw the fossil and knew it was something new. An anatomist and entomologist, von Waldheim knew some of the big names of the time including Darwin’s hero Alexander von Humboldt and the great French naturalist Georges Cuvier. Based on this one jaw, von Waldheim described a whole new Genus of extinct rhinoceros; Elasmotherium.

One of the key features defining this genus was its teeth. Highly evolved for tough grazing, their jaws had no front incisors, or canines; just two flat cubic premolars and three very similar molars. To give extra ‘tooth’ for the wear and tear, the teeth are hypsodont; there is more enamel above, and below, the gum line for longer lasting teeth. Hypsodont teeth are typical in grazing animals, like cows and horses, because grass is a tough plant which can wear down teeth. There is also evidence that Elasmotherium was euhypsodont: like some rodents, its teeth grew continuously throughout life. Today, the white rhinoceros are grazers, and the only living rhinos with hypsodont teeth.

Of the three species of Elasmotherium discovered so far, one was the largest rhinoceros ever to have lived. Reaching sizes comparable to the woolly mammoth, Elasmotherium sibiricum was a truly magnificent beast. Also known as the Steppe Rhinoceros, this enormous rhinoceros had some very unusual features, which has led to this beast quite possibly being the most frequently reinvented creature of the Pleistocene. 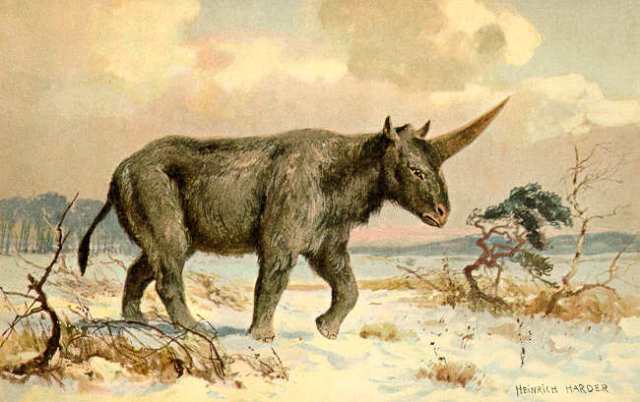 A lovely early illustration of Elasmotherium sibiricum with it’s long legs from the 1920s. The overall appearance looks more like a horse than a rhinoceros. The artistic representations of this giant have varied more than any other Pleistocene animal. (Image from here)

Early reconstructions of E. sibiricum varied hugely. Some depictions in the 1920s, like that above, gave it a horse-like appearance. In the 1930s it was given the look of a stumpy hippopotamus creature creeping out of swamps. As more fossils turned up, the image was changed. Fossil leg bones suggest that this rhino, which lets remember was almost the size of a woolly mammoth, had rather long, slender legs compared to other rhinos. This suggested that E. sibiricum could run. Not exactly as slender as that in the image above, because it was a massive animal, but there is no doubt it could still run at some pace. An almost complete skeleton was discovered in 1964 in the quaint little village of Gaerskaya in Russia. This allowed renewed interpretation of this huge rhino to be, well, more rhino like.

A more modern artists vision of the wonderful Steppe Rhinoceros. Notice the enormous horn covering most of the head. (Image from here)

The feature that has seen the most variation is the horn. And this beast certainly had a horn. Reconstructions have varied from small rounded stumps to enormous 2 meter long horns in the middle of its head (that’s a horn bigger than an adult human!). Unfortunately no remains of E. sibiricum horns have been found, so any reconstructions are incredibly speculative. The skulls found do have a huge proturbance in the centre of the head, which had large blood vessels circling it. Similar to other rhino species, this raised dome would have held a horn. The size of the raised dome is huge, so the horn would undoubtedly have been large, but how big is unknown.

But enough skulls have been found to hint at sexual dimorphism; males have much more robust skulls and larger domes, whereas the females have more gracile skulls and smaller domes. One very intriguing fossil, known as the Guriev Skull, has a wound on it’s skull from a sharp pointed object which had healed during  its life. The wound is very likely to have been from another E. sibiricum; perhaps evidence of males fighting for a female.

One of the first illustrations of the awesome giant from 1878. This is one of my favourites, although it does look a little like a grumpy reindeer with a massive horn stuck to its head. (Image from here)

From current fossil finds, the giant Steppe Rhino appears to have been restricted to Russia, Aisa, Ukraine, and Kazakhstan. There is no solid evidence of this animal living in Europe. Reports of remains from Hungary and Italy have no images, or actual specimens. There is one fossil reported from the Rhine Valley of Germany from the 1850s, but this is disputed; embedded in the fossil is a small mollusc only found in the Pleistocene sediments of Russia.

There is one final enchanting possibility that Elasmotherium sibiricum was in Europe, and was seen by early humans. An enigmatic piece of cave art at Rouffignac Cave in France appears to be an illustration of E. sibiricum, with its unique horn.

A tracing of  the painting of a rhinoceros at Rouffignac Cave, France. Some have suggested that this is a painting of Elasmotherium sibiricum due to the one large horn. (Image from here)

The outline of this painting is uncannily similar to paintings of woolly rhinoceros from Chauvet Cave, France. The large hump on the rhinoceros back is very similar, and the curvature and size of the horn is a close match. 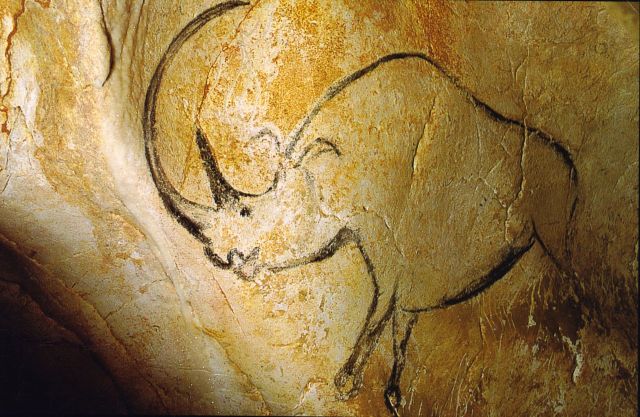 A painting of a woolly rhinoceros from Chauvet Cave, France. (Image from here)

This enormous beast appears to have vanished around 50,000 years ago. Some questionable fossils push the date a little to 37,000 years ago which need further research. More fossils need to be found to extend the date of this amazing rhinoceros. If the painting from Rouffignac Cave is that of an Elasmotherium sibiricum, then it would extend its range to Europe, and push its extinction to around 30,000 years ago.

Apart from the vague possibility from Rouffignac Cave above, any evidence of human/E. sibiricum is yet to be found. The numerous sites holding fossils of this giant have not yielded any human remains, or artefacts. The fossils themselves show no evidence of butchery by humans. In China and Russia, there are tales of a large one horned beast that have been passed down through generations: the unicorn. Perhaps humans did see Elasmotherium sibiricum in all its glory, and the memories have been passed down over the warmth of the camp fires.

Belyaeva, E. I. (1975), ‘About the hyoideum, sternum and metacarpal V bones of Elasmotherium siiricum Fischer (Rhinocerotidae),’ Journal of the Palaeontological Society of India. 20. 10-15. [Full article]

1 Response to A unicorn out of the twilight