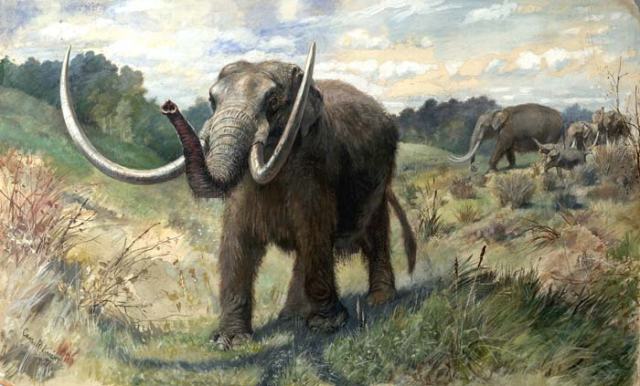 In the everyday language of superlatives “mammoth” and “mastodon” are used almost interchangeably. Yet, despite superficial similarities due to homology through shared ancestry, the animals could not be more different. Mastodons are known from both the old world and the new, but only one species is the mastodon. Mammut americanum was a late Pleistocene species known from North America that holds a special place in the history of palaeontology as one of the first fossils to be recognised from an extinct animal.

Mastodon means, literally, “breast-tooth” or “nipple-tooth”. Unlike the flat, plate-like grinding teeth you see in elephants and mammoths, mastodons had a series of rounded tubercles that appeared suggestive to taxonomists of the time (I think it says more about the taxonomists than the teeth). Mastodons evolved to be browsers of the forest, using their teeth to crush, rather than grind, twigs, leaves, and fruit. The pointed domes of the first teeth to be unearthed suggested to no less a luminary than Thomas Jefferson that this unknown animal (the incognitum) was an elephant-sized carnivore. President Jefferson was an incredible polymath, and devoted a lot of time to palaeontology in the Americas. As well as the mastodon, he also described the first fossil ground sloth: the great claw or Megalonyx. He thought it was a type of lion, but despite this error the species Megalonyx jeffersonii is named in his honour.

Besides the teeth, the tusks are different in mammoth and mastodon. Mammoth tusks curve in two directions (like a corkscrew), mastodon tusks curve in only one (like a rainbow). There are also differences in the microstructure of the tusks. Experts use something known as Schreger lines, growth rings within the tusk dentin, to discriminate between proboscidean species with up to 95% confidence. This is not just an obscure factoid in Quaternary palaeontology: Schreger lines can be used in law to distinguish between African and Indian elephant ivory (illegal) and mammoth and mastodon ivory (legal).

The mastodon has also been the subject of a number of recent scientific advances. In 2007, the complete mitochondrial genome of the mastodon was sequenced from an Alaskan tooth, showing that the Mammut genus diverged from the ancestors of elephants and mammoths about 24-28 million years ago.

Perhaps the most incredible paradigm shift in human archaeology in recent years has been the acceptance of pre-Clovis sites in the Americas, pushing human arrival in the continent back about 2000 years. One of the decisive pieces of evidence for pre-Clovis humans is a mastodon rib from the Manis site in Washington. The rib has a bone speartip embedded in it, obviously made by humans. DNA evidence from the projectile show it is made from mastodon. Pre-Clovis hunters were using mastodon bone to make spears to hunt other mastodon! It’s the circle of life.

20 Responses to The Nipple Tooth