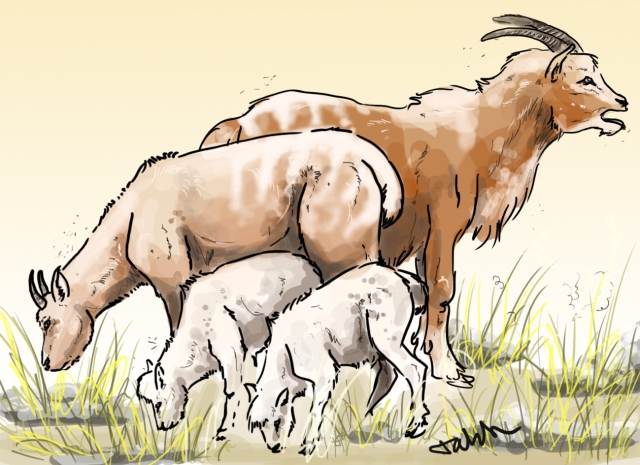 Lets be honest, size really does matter. Especially when it comes to being noticed. An ‘average sized’ creature would really make an impressive headline; ‘Mammoth discovered, the most average one yet’. Crowd pleasing adjectives such as ‘the biggest’, ‘the largest’, ‘the longest’ and even opposites like ‘the smallest’ and ‘the shortest’ will win the day. Even if the creature is pretty mediocre, quirky traits, or witty scientific names, will bring an otherwise inconspicuous beast to the public eye (recently demonstrated by ‘Pinocchio Rex’ an averaged-sized relative of Tyrannosaurus rex that had an unusually long snout).

Rarely, very rarely, something truly remarkable is discovered that fits all the above.

When the great TrowelBlazer Dorothea Bate received a letter in 1909 telling her of bones discovered in a cave in Majorca, she could never have dreamt about what she would find. An inspirational woman, Dorothea was passionate, determined and focused. She travelled to Majorca on her own, and spent a month travelling around the rough, dry terrain of the island searching in caves for bones. The bones in the letter were of a very peculiar animal. So peculiar was the first skull she discovered, she held back on describing it until she found more. Her fossil had extremely odd features.

This strange beast, which Bate named Myotragus balearicus, would have reached half a metre tall; tiny by any non-rodent standards. Myotragus (Greek for ‘mouse-goat’), is neither a mouse nor a goat; it is closely related to sheep. The diminutive size is a classic result of the ‘Island Rule’ (or ‘Fosters Rule’). Simply put, the Island Rule states that some animals will get bigger on islands, and others will get smaller depending on predators and food availability. In this case, the ancestors of Myotragus arrived on Majorca around 5 and a half million years ago and with less food available, survived by getting smaller.

But it wasn’t just the teeny weenie size that continues to make this animal the focus of vigorous debate 100 years later. The mouse-goat had several other adaptations for living on a small island; individually bizarre but together creating an animal like nothing you would expect. Especially weird for a relative of the humble sheep. The closer you looked, the more peculiarities popped up.

Myotragus molars were nicely ridged and flat, typical of herbivores ,so we know this cat-sized goat mouse ate shrubs and low lying vegetation. An unexpected feature was the front teeth (the incisors). All ruminants (sheep, goats, giraffes, antelopes, etc.) have six incisors on their lower jaw; Myotragus had two and none on the top. Even odder, these two teeth grew constantly, so they never wore down. Rats, mice, voles, squirrels and other rodents share this feature. But our little friend appears to have evolved it independently. This may be an adaptation to eating tough, hard vegetation with some researchers suggesting they used it to strip bark or even lichen.

Little Myotragus was a herbivore with strange teeth. You wouldn’t guess it was a plant eater from looking into its eyes. They point forward. All herbivores have eyes which are positioned at the sides of their heads, so they can keep an eye out for predators. Living on an island, with little worry about being eaten (apart from the occasional bird of prey), there was no need for eyes at the side of their heads. Eyes pointing forward were more of an advantage for these mini-mammals; perhaps better vision allowed them to spot each other better.

The list of oddities continues. Both the boys and the girls had little horns on their heads. Normally it would be the males who had the horns, to fight for a female, or show off to a female. Horns on the heads of both sexes may be an adaptation to remove obstacles in the drier seasons to reach food.

Quite possibly the strangest feature of all is the way the bones grow; more like a reptile than a mammal! The bones didn’t grow constantly like a normal mammal, instead, something made the bone grow slower, or even stop growing for a period of time, just like a crocodile. This ‘something’ was the environment; the cells in Myotragus were able to react to a drier, more difficult season with less food, by slowing its growth. Truly remarkable and something no other mammal does.

The astonishing adaptations allowed this animal to survive for around five and a half million years on Majorca and another nearby island, Minorca. Humans met Myotragus, and even tried to domesticate it. They failed, and this wonderful animal vanished forever only around 5000 years ago. This may truly be one of the most peculiar Twilight Beasts ever to have lived.

Andrews, C. W. (1914), ‘A description of the skull and skeleton of a peculiarly modified rupicaprine antelope (Myotragus balearicus Bate) with a notice of a new variety M. balearicus var. major‘, Philosophical Transactions of the Royal Society. series B, 206, 281-305. [Full article]

9 Responses to The mouse-goat crocodile chimera