Posted on January 19, 2018 by twilightbeasts

My mum passed away suddenly at the beginning of January. It was a huge shock. It still is a huge shock. It still doesn’t seem real that I will never see her again. Life is so fragile. I wish there could have been more time. She was an exceptionally kind woman, and had a wicked sense of humour (traits which I hope have been passed on to me). Whenever I visited my folks, her and I would escape my chaotic loud siblings and play Scrabble for over an hour (she always won). We would catch up, and she would always chuckle endearingly at my nerdy fossil talk.

I wanted to write a little post that would have made her smile. There are thousands of animals that are good mothers: birds, mammals, even reptiles. But I think she would have liked something a little unusual. A little different. A post about weird hippos would have done the trick.

Despite the African hippopotamus (Hippopotamus amphibius) being a massive herbivore, there is something about them that is pretty special. They are undoubtedly adorable creatures: their huge curved mouths that look like a big smile; those short stumpy legs waddling; those big soft eyes. And they are extremely good mothers. The Ancient Egyptians knew this, and worshiped the half-hippo, half-human goddess Taweret who protected pregnant women during childbirth. The mighty hippopotamus even makes a slightly comical appearance in music, with Edward Keffer’s ‘Hippopotamus Polka’, and a delightfully flamboyant accompanying illustration. 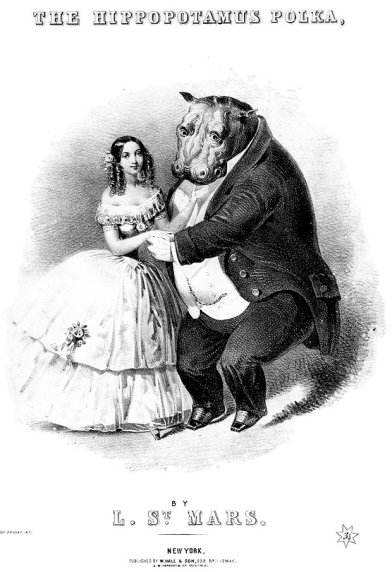 My mum would have seen the humour in this. A somewhat flamboyant, yet gallant, hippopotamus taking the lead. The image is from the ‘Hippopotamus polka’. (Image public domain)

Then there’s also the lovable, but highly threatened, pygmy hippos (Choeropsis liberiensis). These little beasts are only around 0.8 meters: an adult would reach up to my hips! Coming out at night in forests to feed on ferns, grasses and fruit, they live in just three areas in Africa. Pygmy hippos are a different genus to the larger species, which means they didn’t evolve from the larger Hippopotamus amphibius, but shared a common ancestor some 8 million years ago. 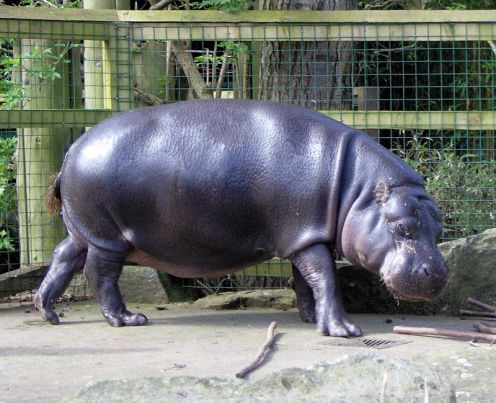 Today hippos are restricted to the continent of Africa. In the past they were widespread across Europe, with a number of different species. Our familiar large African beast was even shuffling around in Britain. Not all hippos outside of Africa were big. Some were pretty small. And I’m not talking about pygmy hippos.

Islands are fantastic harbingers for evolution to run wild. Originally desolate places, any species that makes their home there has unique opportunities to explore new niches. Seeds and insects are blown to islands by the winds. Some animals accidentally end up there by sitting on logs. Some even swim there. Once there they have little competition compared to their home lands, and evolve some incredible adaptations for their new environments.

Not all island inhabitants are the new comers. Some arrive long after flora and fauna have been established on this isolated paradise. And some strange things can happen. Small animals can evolve relatively quickly to be pretty darn big, like the Maltese dormouse, or the komodo dragon. With little competition and less predators than the continent, these small animals exploit the new environment and enjoy the new bounties.

Small animals become big. The very opposite happens to big animals: over time they shrink! There are three species of mammoths that shrunk to pure cuteness in the past, and it has happened to our own genus too, with the enigmatic Homo floresiensis on the Indonesian island of Flores. Large animals need a lot of food to survive. Those individuals who are a little smaller and can survive with less food have more offspring. A lack of predators also means they don’t need large size for safety. And so, through time, the species becomes smaller. 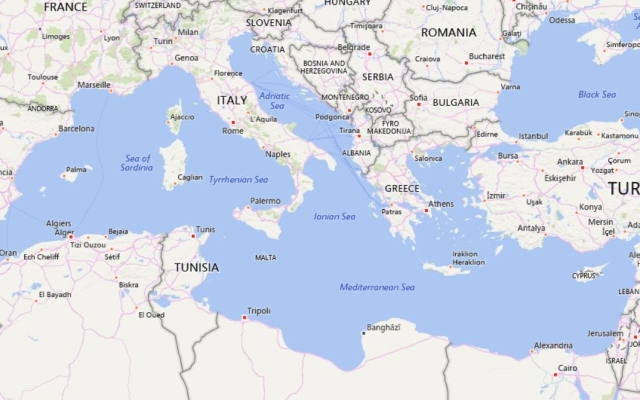 The Mediterranean Sea, with it’s half a dozen large islands. (Image from Google Maps)

The warm Mediterranean Sea is scattered with dozens of islands. Today they are popular tourist getaways to enjoy the sun and the sea. Not too long ago they would have been very different with some truly incredible animals. Two of these islands were home to dwarf mammoths: the Sardinian dwarf mammoth and the Cretan dwarf mammoth. Perhaps more incredibly, four islands had hippos living on them!

As well as a dwarf mammoth, Crete had a dwarf hippo (Hippopotamus creutzurgi). Sicily, Malta and Cyprus also had dwarf hippos (H. pentlandi; H. melitensis; and H. minor respectively). Around the same size as the pygmy hippo, these little hippos were not their close relatves. Skeletal features suggest that they evolved from the hippo that was at home in Europe, H. antiquus, most likely four separate times. 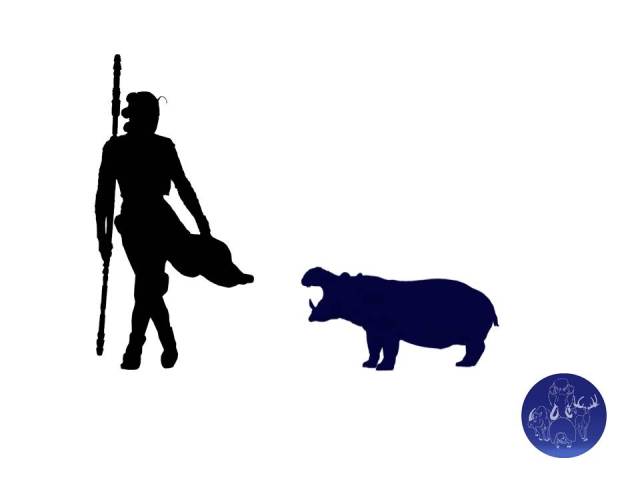 The smallest of the Mediterranean dwarf hippos, Hippopotamus creutzburgi. (Image by Twilight Beasts)

Lower sea levels in the Mediterranean between 150,000 and 100,000 years ago meant that animals did not have as far to swim to these islands (relative to today!). And hippos can swim quite well. Once big lumbering hippos first stepped ashore, there were no natural predators. These hot islands may seem like an unusual habitat for hippos, but the environment was different then. Examining oxygen isotopes in nearby Macedonia, shows it was cooler and wetter from around 100,000 years ago compared to today’s climate. These plump little beasts would have waddled around in pretty lush forests feeding on grasses, shrubs and fruits.

What a sight they must have been.

We don’t know for sure exactly when or why these buxom (a word my mum would have liked) beasts disappeared. Today the Mediterranean islands are hot and very dry. British people travel there in their thousands every year only to return with ghastly red and sunburned skin. The Mediterranean began to warm up quite quickly around 25,000 years ago. With a warmer climate comes a drier, harder environments for animals, especially those which love the wetness. More research needs to be done on these well-rounded little animals until we can say much more.

Just look at the size of this hippo! The dwarf Madagacan hippo Hippopotamus (Choeropsis) madagascariensis. (Image by Osborn, public domain)

What’s truly fascinating is that these hippos lived until very recently, just around 1000 years ago. There’s even evidence of cut marks on bones, showing that humans were not too shy to eat them. For these species, the arrivals of humans to Madagascar around 2000 years ago was their end. Small, chubby legs were no way set up for outrunning fast predators. Sadly they vanished around the same time William the Conquer became King of England.

When species have gone, they are not gone really. Our blog posts keeps these wonderful creatures alive. I like to think the same is true when someone has passed away. I know that they will never really be gone.  It is our memories of our loved ones that keep them alive inside us. Just like we share our blog posts, our memories too can be shared, so they are still alive in our children, and their children too. I don’t know if my mum ever read any of my blog posts, but I’m pretty sure if she read this and discovered tiny, cute, plodding dwarf hippos were once alive, she would have smiled to herself.