The last trumpet of a giant

Posted on June 5, 2015 by twilightbeasts

“The Columbian Mammoth of North America, Mammuthus columbi, is hereby designated as the official fossil of the state of Washington.”

And so it was written. In 1998 the Washington State Legislature recognised the Columbian Mammoth as their official state fossil. The decision was not easy. Nor was it quick. It took four years of tireless efforts by pupils from Windsor Elementary School, pushing for this magnificent, extinct mammal to have the recognition it deserved. 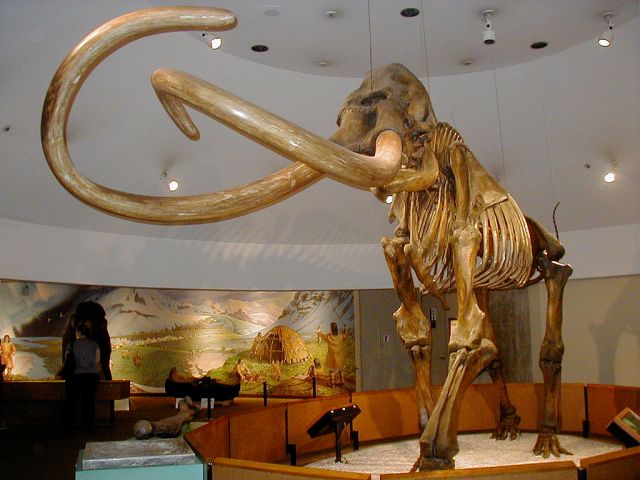 Magnificent skeleton of the Columbian mammoth (Mammuthus columbi) on display at La Brea Tar Pits. This skeleton is made from several individuals. (Image by Wiki member WolfmanSF from here)

For official American legislation to recognise an extinct creature is fantastic: It ensures this animal is recognised by a more general audience, as well as people pretty high up in government. The wording in the ‘notes’ however may need a little bit of tweaking:

“The legislature recognises that the large, hairy prehistoric elephants of the extinct genus Mammuthus roamed the North American continent, including the Pacific Northwest, during the Pleistocene epoch (ice ages).”

There were actually more than one species of ‘large, hairy prehistoric elephants of the extinct genus Mammuthus [that] roamed the North American continent…during the Pleistocene’. There were at least half a dozen species of Proboscideans lolloping across the landscapes. First came the Southern Mammoth (Mammuthus meridionalis), a real giant stomping across the Bering Strait into North America in the very early Pleistocene, around 2 million years ago. Then there was Imperial Mammoth (Mammuthus imperator) during the middle Pleistocene, a possible descendent from the Southern mammoth. Our big mammoth, the Columbian Mammoth, likely evolved from the enormous Imperial Mammoth in the Late Pleistocene. Some Columbian Mammoths swam across the choppy waters off the sandy Californian beaches, for around 12 miles(!) landing on a small set of islands, where over millennia they were subject to Island Dwarfism. These Dwarf Mammoths (Mammuthus exilis) lived successfully on these Channel Islands for several thousand years. There was more. Our shaggy friend, the Woolly Mammoth (Mammuthus primigenius) made an appearance in North America hovering at the northern part of North America from around 100,000 to 15,000 years ago. The North American landscape would have seen herds of other big Proboscideans too: the awesome Mastodons (Mammut americanum) and a cool Gompothere (Cuvieronius tropicus) dotted the land. North America was owned by the Proboscideans.

The Columbian Mammoth (shown in red) was a real big beast. The more familiar Woolly Mammoth is silhouetted in light blue, almost half the size. (Image Public Domain)

The Columbian Mammoth was one of the largest species of mammoths to have existed. You would think naming it and identifying it from fossils would be easy. Not to begin with. First named in 1857 by the scientist Hugh Falconer, the Columbian Mammoth was christened Elephas columbi (later it was moved into the Mammuthus genus, but keeping the original species). Taxonomy was rather taxing in the 18th and 19th centuries – new species were identified and named, ignoring species already present. M. columbi had several different names, but recent study of many of the fossils have shown that Falconer’s original species holds. Mammuthus columbi survives. (Falconer named the species ‘columbi’ not after the country Columbia, but after Christopher Columbus.)

Fossils of the Columbian Mammoth have been found all across the southern part of North America, as far south as Mexico. This was a hugely sucessful species. With so many fossils of this giant discovered, we have a fairly good understanding of it’s life and environment. 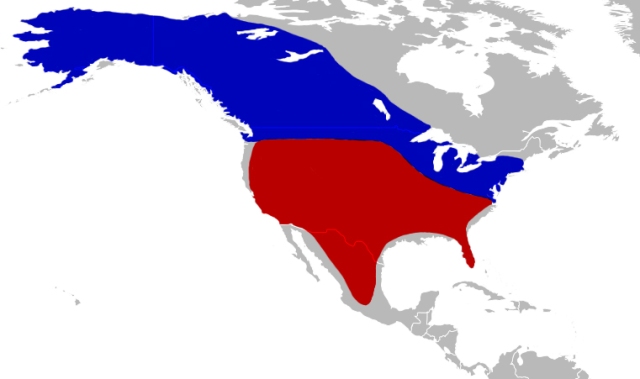 The distribution of the Columbian Mammoth (red) and the Woolly Mammoth (blue). There would have been overlap of the two species at times, but generally they stayed in the environments that suited them. (Image Public Domain)

Living for around 80 years, Mammuthus columbi would have gone through six sets of molars, just like the Woolly Mammoth and modern elephants. Food full of grit slowly wear these though teeth down which is replaced by a new one. After the final sixth molar has gone, the giant will die of starvation. These huge teeth, which can be as long as my arm, tell us about the food it ate and the environment.

Mammoth teeth are pretty funky. Instead of enamel entirely covering dentine, like our teeth, Mammoths have plates of enamel and dentine which repeats along the whole tooth (imagine a loaf of sliced bread and each slice is a plate of enamel, then next a plate of dentine, and so on). The surface of the tooth had strong, sharp ridges of enamel which were needed to pound kilo’s of vegetation every day. Nature’s very own pestle and mortar.

Isotopes in the teeth and rare stomach contents show that the Columbian Mammoth wasn’t a particularly fussy eater. The diet was mostly grasses, and in harsh times they would have eaten tougher shrubs and woody plants. Paul Martin, the great advocate of the overkill theory, and his colleagues has studied Columbian Mammoth dung. And in a lot of detail too. One site, Becham Cave, Arizona, has an enormous layer of dung: 14,000 cubic feet – that’s enough dung to fill two and a half double decker buses! To steal the words of Ian Malcolm, that’s a big pile of shit. And this big pile of shit can tell us an awful lot. Dated to around 12,000 years ago, it was mainly the dung of Columbian Mammoths (some smaller dung balls possibly belonged to ground sloths). Slowly taking it apart and looking at the plant remains revealed a window to past environments: sedges and seeds from marshy habitats were abundant. Birch, rose, saltbush and other herbaceous plants were also found, indicating a time when Arizona was much cooler than the hard, wind blown desert we see today. Surprisingly there were large amount of cactus spines in the dung, indicating that this family of Mammoths in Arizona were happily eating cacti.

This giant enjoyed a more luscious, rich environment shared with other giants of the Pleistocene. To me this warmer, richer environment suggests that Mammuthus columbi was not as hairy as the Woolly Mammoth. It may have retained some of it’s hair, as we know the giant sloths had thick hair. But I see them as less hairy than their colder adapted cousins.

For such an enormous beast, adult Columbian Mammoths had little need to worry about predators. There were big, and fearsome, predators stalking around Pleistocene North America. They would have taken advantage of the old or weak. They no doubt tired their luck with taking down a young Mammoth calf. Smilodon, Dire Wolves, and the Giant Short Faced Bear posed very little threat to a fully grown, enormous Columbian Mammoth. Life was precarious for the young and the old, but at the prime of their lives, these truly magnificent creatures were threatened by no animal.

That is, until humans arrived. 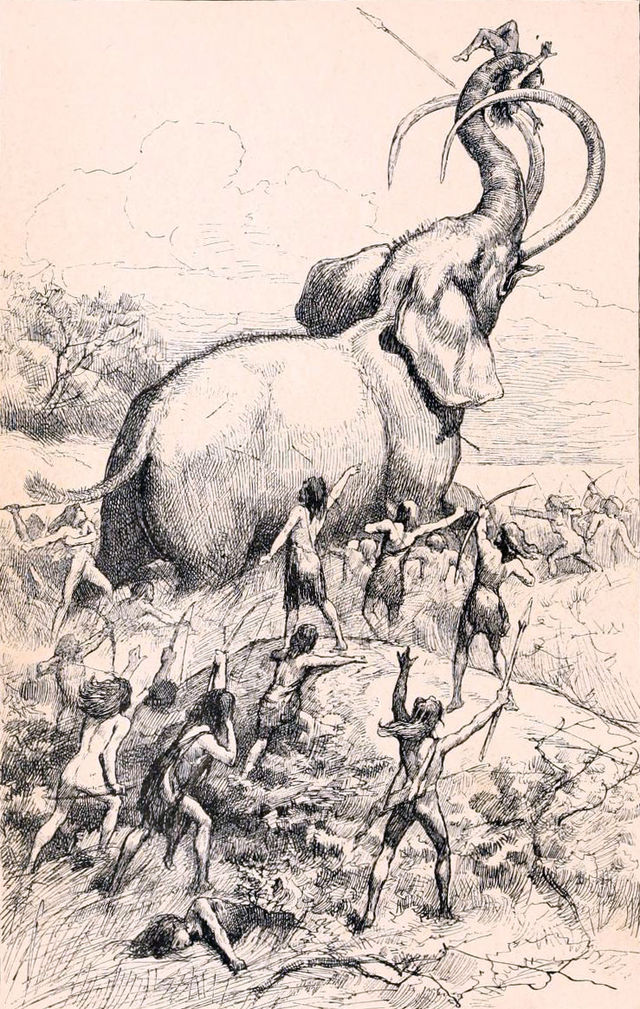 Humans entered North America around 20,000 years ago following the same route as the ancestors of the Columbian Mammoth. Several fossil locations show evidence of humans butchering mammoths. These butchery sites give glimpses into what may have happened to push their demise. And it appears that the Columbian Mammoth met the same fate as their Eurasian cousins – and by the same hand. Rapidly changing environments at as the ice at the end of the last major glaciation retreated, put enormous stresses on these mega herbivores. Some animals can bounce back from extreme stress. Perhaps the Columbian Mammoth would have, if it hadn’t been for an additional stress. With diminished numbers in a harder environments hunting by humans may have been the tipping point. Sometime around 11,000 years ago a band of humans would have heard the last trumpet call of a Columbian Mammoth, as it moved slowly across the land. Alone.

More about the dwarf mammoths here by Brian Switek.

Martin, P. S. (1999), ‘Twilight of the Mammoths: Ice Age extinctions and the rewilding of America’, university of California Press. [Book]

Patterson, D. B. Mead, A. J. & Bahn, R. A. (2012), ‘New skeletal remains of Mammuthus columbi from Glynn County, Georgia with notes on their historical and paleoecological significance’, Southeastern Naturalist 11 (2). pp.163–172. [Abstract only]

Purdy, B. A. et al. (2011), ‘Earliest art in the Americas: Incised image of a proboscidean on a mineralized extinct animal bone from Vero Beach, Florida’, Journal of Archaeological Science 38 (11). p.2908. [Abstract only]

13 Responses to The last trumpet of a giant