The long reign of terror

Bold capital letters spell out the above chilling sentence on the back cover to Michael Crichton’s sequel to Jurassic Park. No blurb. No description of the novel. Those three words say enough.

That short, simple, yet powerful sentence could be used for one of the most famous events in geological history: the K-T extinction. This is now formally known as the K-Pg extinction and heralds the end of the Cretaceous Period and the beginning of the Paleogene Period. It still marks the same asteroid impact that happened 66 million years ago and the end of the non-avian dinosaurs. But something has survived. The avian dinosaurs we see every single day: birds.

In Paleogene park: something has survived.

This may seem a little over the top. But we are not talking about blue tits, or blackbirds. There were once bigger avian dinosaurs running extremely fast across the grasslands of the Pleistocene. Some which were just as terrifying as their relatives back in the Cretaceous.

One group of birds in particular may well have been the most terrifying of all. The Phorusrhacids. Most of the species in this group were huge, giving the group their well-known name, the ‘Terror Birds’.

So far, about 13 genera, and 18 species have been discovered for this family, distributed over five subfamilies. These extinct Cariamiformes (related to the extant seriemas) have vast fossil record and are distributed from the Eocene to the Pleistocene coming from Argentina, Brazil, Uruguay, USA and Africa. Recently, some isolated remains from the middle Eocene of Europe have been reported as belonging to Phorusrhacids.

These big birds are characterized by their elongated hindlimbs, narrow pelvis, and reduced forelimbs. It is their enormous skull with their tall, long, narrow, and hollow beaks ending in a hook which really mark these beasts out against others. The structure and design of the beak are exclusive features of the Phorusrhacids. And they are terrifyingly magnificent. 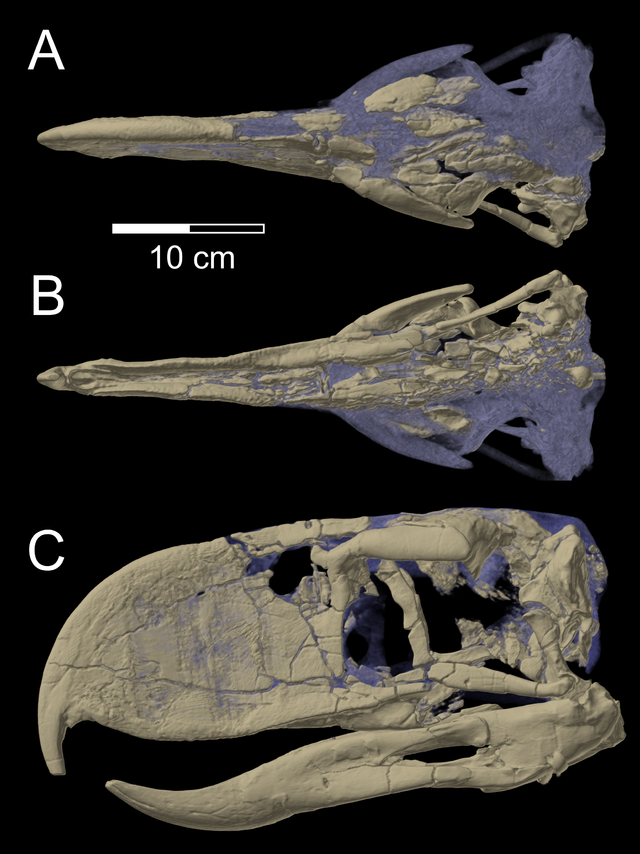 An incredible CT scan of a skull of the terror bird Andalgalornis steulleti. A, dorsal view, B, ventral view, and C, left lateral view. Notice how thin the skull is, but the beak is huge. Fossil bone is shown in light brown, and rock matrix and plaster restoration are shown in grey. (Image from Degrange, et al. 2010. From here)

The fascinating history of the discovery of the Terror Birds began in 1887. At that time Florentino Ameghino, former Assistant Director of the Museo de la Plata, and Francisco P. Moreno, head of the museum, were in a middle of a bitter dispute. The disagreement between Moreno and Ameghino was triggered by the discrepancies that emerged regarding the publication of the remarkable fossil mammal collection gathered by Carlos Ameghino in Santa Cruz River. Among other fossils, Carlos Ameghino discovered a large, toothless jaw from the Miocene of the Province of Santa Cruz. His brother, Florentino, named the fossil as Phorusrhacos longissimus, assigning it to a new family of edentulous mammal.

After the Ameghino brothers left the Museo de la Plata, they continued with their palaeontological exploration. Meanwhile Moreno, in order to gain priority over his rivals, published a series of brief reports about the new palaeontological discoveries made by his field researchers. In 1888, Moreno was the first to refer to the giant birds of the Mio-Pliocene from Argentina. He proposed the name Mesembriornis milneedwardsi for a tibiotarsus, a fibula and a vertebra collected in Monte Hermoso, on the south-eastern coast of Buenos Aires province. The ever-competitive Moreno also dscribed another species Paleociconia australis from an incomplete tarsometatarsus found in the same location.

After reading Moreno’s paper, Carlos Ameghino wrote to his brother on 23rd December, 1890:

“Moreno’s large fossil birds, which so much puzzled us (Mesembriornis, etc.) have also appeared. They are indeed gigantic birds, some of them perhaps as large as the Gastornis. Could not the beak of Phororhacos belong to one of these birds?”

Florentino Ameghino dismissed this suggestion in a letter dated on 30th January, 1891:

“The possibility that the beak of Phororhacos belongs to a gigantic bird seems unlikely to me; because if it was so, they would be birds from groups completely distinct from those we presently know and without any relationship with the gigantic birds from Madagascar and New Holland. Personally, I tend to believe that it may well belong to an extinct giant monotreme”

A new discovery made by Carlos later during his fourth trip to Patagonia, forced Florentino to recognize Phorusrhacos as a bird. Carlos’s discovery was mentioned in the “correspondence, travels and explorations” section of the Revista Argentina de Ciencias Naturales, without mention of Moreno’s discoveries. But the publication of Moreno and Mercerat’s catalogue of fossil birds from Argentina in 1891 was a decisive element in the history of research on Phorushacids, not only because it contained descriptions and illustrations of many new taxa, but also because it prompted Florentino to quickly publish his own descriptions and interpretations of Phorushacids.

In 1895, the critical financial situation forced Florentino Ameghino to sell his fossil bird collection, in order to support his further work in Patagonia. The collection was purchased by the British Museum (Natural History) by the sum of £350 £ in 1896 (around £40,000 today).

These were fascinating creatures. And the history of their discovery was just as fascinating. The largest known Phorusrhacid was Kelenken guillermoi which lived around 15 million years ago in the Miocene of Argentina. The skull alone was as long as my legs, and the whole animal could reach 3 meters high (double my height!). Kelenken is also represented by a tarsometatarsus and a broken phalanx found at the locality of Comallo (Río Negro Province, Argentina).

Our giant from the Twilight was Titanis walleri. It was big, at 2.5 meters tall and weighed approximately 150 kilograms.

At over 2.5 meters tall, this giant bird would have towered over humans. Our species, however, never saw this group of big birds, as it vanished long before we set foot in the Americas. (Image by Jan Freedman)

It originated in the South American Miocene, around 5 million years ago and appears to have gone extinct at the dawn of the Twilight period, around 2 million years ago. Parts of the skeleton have been found, but to date, no skull. From the fragmentary skeletal remains, it appears to have been marginally shorter than the biggest Terror Bird. It does appear to have had a slightly stockier body than other species, and it seems to have been fast: estimates suggest this bird could sprint at 65 miles per hour!

Illustration of the giant Titanis walleri. (Image by Dmitry Bogdanov from here)

The Phorusrhacids diversity declined towards the end of the Pliocene (around 2.6 million years ago). The latest geologic occurrence of the Phorusrhacidae comes from late Pleistocene sediments of Uruguay (although dates of 400,000 and even 17,000 years have been unsubstantiated with other evidence). These were a successful group of animals that were on the planet from 62 million years ago until around 2 million years ago. They were giants of the ecosystem and the top predators for 60 million years. So what happened?

North and South America were large separate landmasses, drifting blindly for around 120 million years. Each had their own unique creatures, evolving for millions of years on their own. Then, around 3 million years ago, something big happened. North and South America became joined by a tiny slither of land, the Isthmus of Panama. Less than 80km wide, this natural bridge, shaped the Americas we know today. It also impacted on two ecosystems that had been isolated for millions of years.

Animals from North America moved across this landmass to South America, and animals in the South moved up to North America. We saw the effect of the Great American Interchange on the Gomphothere, Toxodon and Glyptodon. These animals were specially adapted for their environment. Moving to new pastures on a different landmass was a rapid change in environment. Some animals managed to hold on for some time, while others couldn’t and had no chance of adapting quick enough. 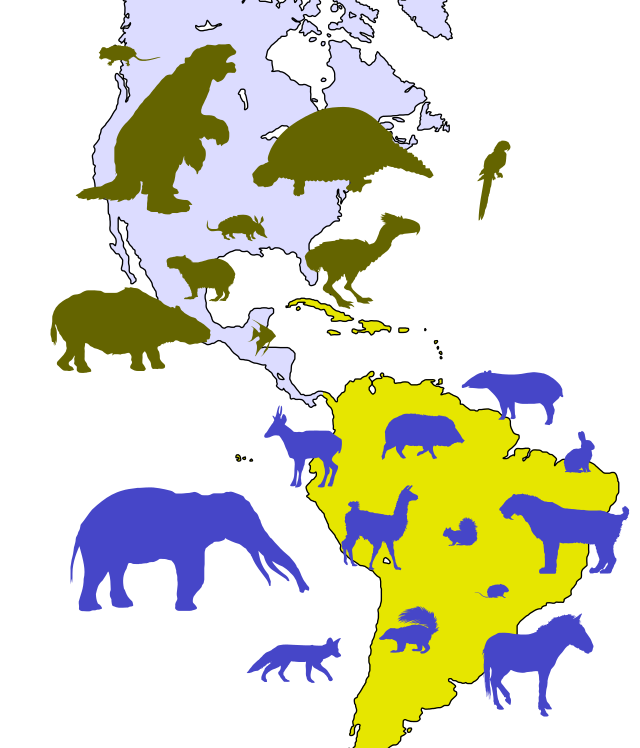 The Great American Interchange saw numerous species move north and south. The blue silhouettes were originally from North America, and the dark green are species originally from South America. (Image by wiki member Woudloper from here).

Titanis walleri moved north over the land bridge. Here was an ecosystem that was drastically different to one it was used to. More swamps, different prey and other predators. A predator that was well adapted to hunt the food there: Smilodon. The Titanis that stayed in South America soon vanished, possibly from increased competition from the northern sabre-tooth cat moving south into the Terror Bird’s territory. Evidence for the root of their extinction at paleontological sites is scant, and it was most probably a combination of new predators from the Great American Interchange along with changing environments at the start of the Pleistocene. We do know that for this extinction humans weren’t to blame.

Very recently a new species of Terror Bird, Llallawavis scagliali was discovered in Argentinean sediments dating to around 3.5 million years. It was one of the most complete fossil Terror Birds ever found, and is 90% complete. One of the interesting things the fossils shows is something that is not preserved in the fossil record: the animal’s voice. Looking at delicately preserved bones in the inner ear, Degrange, et al. (2015) compared it to other species and it closely resembles those that hear in low pitches. For around 60 million years, the deep rumbling voices of Terror Birds would have haunted the land.

Terror Birds left only their fossils as evidence of their existence. But something did survive. An ancient cousin that still silently runs around South America: the seriemas.

Beautiful, but terrifying. The red legged seriema (Cariama cristata) alive today. The closest relative to the Terror Birds. Standing one meter tall, with a sickle claw, this is a formidable beast. (Image by Whaldener Endo from here)

These long legged birds are much smaller than the Terror Birds, with a height of 1 meter. But there are similarities. They rarely take to the air. They are quite vicious carnivores and will bash their prey or sling it against a rock to kill it. These birds also have a sickle claw on their foot which they use to tear flesh into smaller chunks.

A sickle claw. On a bird alive today.

If there was a sequel to the Terror Birds, Michael Crichton’s three words would be more than appropriate.

Buffetaut, E. (2013), ‘Who discovered the Phorusrhacidae? An episode in the history of avian palaeontology’, Proceedings of the 8th International Meeting of the Society of Avian Paleontology and Evolution Paleornithological Research 2013. [Full article]

13 Responses to The long reign of terror